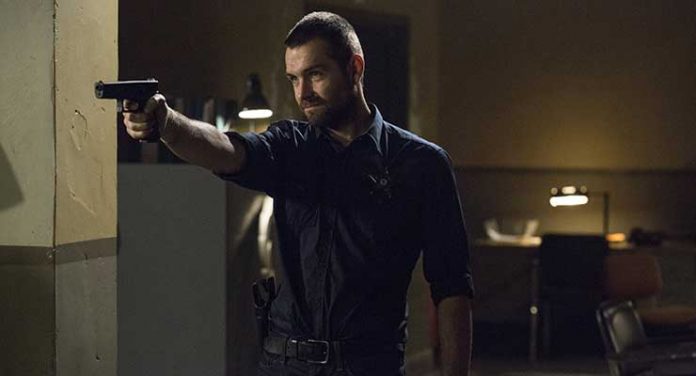 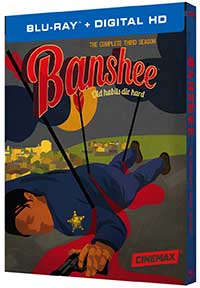 The third season of this excellent Cinemax original neo-noir action drama starts up three months after the Season Two finale where Carrie’s (Ivana Milicevic) father the gangster kingpin Rabbit (Ben Cross), finally met his end in a violent shootout. Now, having been exposed to her family and the town, Carrie is estranged from her husband and children and working as a waitress in a local diner by day while pulling off heists at night with local barkeep Sugar Bates (Frankie Faison), super hacker Job (Hoon Lee), and Lucas. Meanwhile it is getting more difficult for Lucas to keep up his cover as the sheriff of Banshee and keep his true identity a secret from his deputies, especially now that he is romantically involved with one of them – Siobhan Kelly (Trieste Kelly Dunn). The season is also one of – what else? – violent conflict between the Banshee police force and the ever-present Amish gangster Kai Proctor (Ulrich Thomsen), Native American revolutionary Chayton Littlestone (Geno Segers) who leads the

Redbone gang of the local Kinaho tribe, and other local drug dealers who begin to feel cheated by Proctor when his niece Rebecca Bowman (Lilli Simmons) begins selling drugs to their rivals against Proctor’s orders. While all of this is stewing, Lucas brews up one of his most audacious schemes ever – to rob a local, decommissioned Marine compound now housing millions of dollars in cash.

While the series seems to have pushed the idea of Lucas Hood posing as the sheriff of this small town about as far as it could go in this third season, one can definitely say that the season was anything but disappointing. It was gripping, suspenseful and violent in that Banshee sort of way. And each of the characters were advanced satisfyingly, so much so that, the fourth and final season, which kicked off already, doesn’t even feel anything at all like the Banshee fans have come to know and love. How could it? I won’t drop any spoilers, you’ll just have to watch to see.

The high-definition production of Banshee has never failed to satisfy. The show is gritty and often looks a bit gritty, but not in a bad way. Detail is crisp with a nuanced amount of shadow detail in what is an often dark, and somewhat desaturated palette. Compared to streaming and broadcast versions, the Blu-ray looks fantastic with no banding or video noise and pretty strong black levels as well.

The English DTS-HD Master Audio 5.1 soundtrack is atmospheric and tightly mixed with lots of little sound

effects, an excellent balance of the score and dialogue, and extended low-end to support the numerous fight sequences, gunshots and more.

This set is packed with audio commentaries with the producers, writers, and directors; behind-the-scenes featurettes on the episodes, a really cool interactive version of The Heist that lets you switch your point of view between the characters, and, of course, the Banshee Origins and Origins Saga episodes that dig deeper into the character connections and backstories.

An excellently crafted and climactic season that very well could have served as the last if it needed to, Banshee: The Complete Third Season is a must-have on Blu-ray for fans. It looks and sounds great and was very well written.