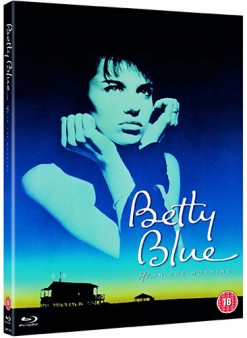 With Betty Blue (37°2 le matin) Jean-Jacques Beineix takes the Philippe Djian novel and turns it into one of the most evocative, atmospheric, and passionate romances on the screen. Shot with every bit of detail and beauty that the impressionists put into their paintings (just look at the beautiful pastel seaside colors and his playful use of light), Beineix’s film is a journey into sex, obsession, and ultimately madness like none that came before it, and like few we have seen since.

Zorg (Jean-Hugues Anglade) is a quiet handyman living by the seaside eking out a living painting the seaside shacks and privately aspiring to be a writer. Into his life comes the sexy, impetuous, and capricious Betty (Béatrice Dalle), who quickly turns his life upside down. Zorg is head over heels after just a week, and the two spend their time sharing passionate lovemaking sessions and working together. One night when Betty’s temper gets the better of her she finds Zorg’s writing and becomes obsessed with it. She convinces him to make a go of getting published. When the two take off from the seaside and head to the city to stay with friends, Betty’s mental state only begins to decline as Zorg’s success is slow to come. In spite of his best efforts to keep Betty safe and happy, her self-destructive streak reaches a shocking and violent crescendo whilst the two lovers are taking care of and living over a piano store for a friend.

Betty Blue is a fantastic film that handles the painful subject of mental illness with perfection. Beineix never slips into a sappy dialogue on the subject. He prefers to give us a rather frank and desperate look at the lives of two people caught up in a whirlwind of love and, sadly, enabling, as they cope with the issue, however poorly they do it. Betty Blue‘s central love story is a messy one. It’s also an erotic and humorous one. When Zorg robs an armored car dressed in drag and one of the guard’s on duty flirts with him during the robbery, it’s difficult not to find it wholly farcical. Yet, even as that is occurring, we know in the back of our minds that Zorg has been driven to the brink by the very serious problem he is dealing with with Betty.

Béatrice Dalle is mesmerizing on screen in this film as Betty. She is, without a doubt, amazingly sexy, but beyond that obvious fact, she puts on a riveting portrayal of a woman in the throes of a breakdown, switching from happy, to somber, to outright mad on a dime. She’s scary, loving, and, in a word, brilliant. There’s no wonder that this film was her star making turn.

This edition from Second Sight includes the over three-hour director’s cut of Betty Blue alongside the theatrical cut, but the film is so gripping, that even in this extended edition, it feels more like 2-hours when you reach the end. There’s a fine balance of superb acting, cinematography (Jean-François Robin) and direction in Betty Blue, in the superior extended edition.

Like many of the films that arrive on Blu-ray from Gaumont, Betty Blue‘s AVC/MPEG-4 1080p transfer looks a bit too scrubbed of its natural grain. What we end up with is a rather pristine-looking image that can look pleasing to grain haters and non-videophiles, but also makes things look too smooth. Skin texture has a waxy sheen and skies tend to look a bit smeared in motion, almost like paintings rather than truly lifelike. Apart from that issue, however, the colors look magnificent, and there is, obviously, given the aforementioned clean up, not much source damage to worry about. Shadows some crush on occasion, but nothing that really hampers overall detail.

Despite only being a monaural soundtrack, the French LPCM 2.0 (48kHz/16-bit) track included here sounds as good as it gets, with a strong sense of air and dynamics, and clean dialogue, free from clipping/crackle.

The Blu-ray has both the original theatrical release and the director’s cut of the film. This deluxe edition also contains a DVD that comes with the following: