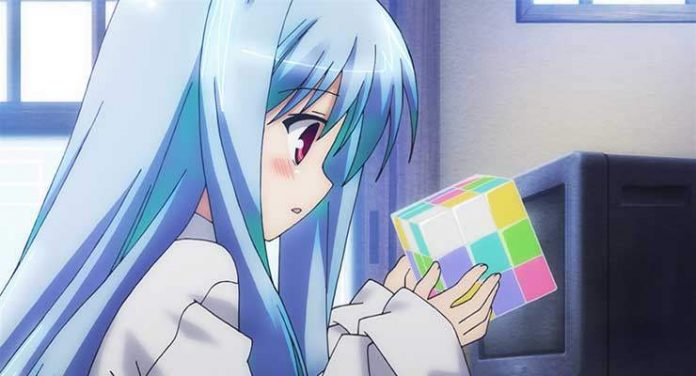 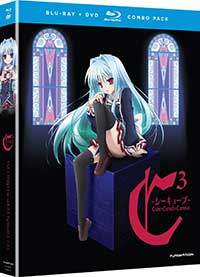 C³ or CubexCursedxCurious is based on the light novel series written by Minase Hazuki and illustrated by Sasorigatame. OOnuma Shin (Kokoro Connect) directed this anime series. Being unfamiliar with this series going in, it was not what I expected at all based on the name of the series and the cover art, so, don’t judge a disc by its cover, I guess. What I expected was more of a mystery/thriller/horror series, and, while there are some of those elements,C³ turned out to be more of a standard comedy, harem series with elements of action, mild fan service, mild ecchi, and moe character designs.

The story follows male protagonist Yachi Haruaki who receives a delivery of a strange metal box from is father and awakes in the night to find a girl named Fear who has appeared from this box. It turns out the box is an old, cursed, medieval torture device and Fear is the living embodiment of, well, fear, now in human form. Haruaki now has to protect Fear from a number of fantastical groups who want to capture and destroy Fear, but he gets help from his neighbor Muramasa Konoha, who also happens to be a cursed object or “worse” 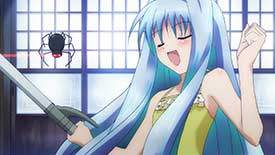 as they are called. She is a sword that Haruaki wields against their enemies. Ueno Kirika is another one of these cursed girls. Her body is covered in S&M gear that keeps her from dying, but it also brings her great pain. She must inflict pain and torture on herself in order to feed the cursed object’s curse. But, Fear, and to a lesser extent Konoha, are subject to losing themselves to uncontrollable blood lust when they use their cursed abilities and draw blood or worse, kill. Oddly enough, when these “worse” are not battling, they are like normal schoolgirls. Fear has a particular craving for rice crackers and getting herself into trouble at school, Konoha is the jealous type, Ueno, the class president, is a strict disciplinarian, sort of fitting for someone cursed with BD/S&M gear, and Haruaki is typically clueless to the growing number of cute girls around him he has to fight to save and protect who are all falling in love with him.

C³ from an animation standpoint has a good mixture of moe and more eerie character designs. There are some viscerally violent moments during many of the action sequences that standout even more given the series mostly calm, and prototypical “high school comedy” feel for much of the episodes. This dichotomy is what makes C³ somewhat strange to sit through for me. It is not that the look isn’t catching, because it is, but the overall feel and arc of the story somehow doesn’t quite come together. Although, I must say that there is something compelling at the heart of it all with Fear who is ultimately looking for redemption from her “sins” and suffering in her own way from what she has been forced to do for centuries. And, again, her moe look is often at odds with the violence of her cursed object side; that’s not a bad thing. It makes for a more interesting series to watch, ultimately.

The AVC 1080p encodement of C³ looks good. Some slight banding aside, this is a pretty crisp and clean title where the digital animation looks vibrant and clean with no abhorrent anomalies that really standout. 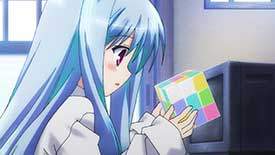 Only the Japanese Dolby TrueHD 2.0 stereo mix is included on this release. The cast is good, so not having an English dub is fine with me and I usually prefer the Japanese casts anyway. That said, this release seemed to bring up a lot of old issues I have had with FUNimation releases in the past that I hadn’t been noticing on some of the more recent releases. Number one, the overall mastering level is low so I had to pump the volume up at least 4 to 6db above my normal listening levels. Number two, there isn’t much dynamic range so everything sounds a little squeezed. Number three and most annoying of all is the sound kept going out of sync. Now, some may say this is related to my equipment, but the last time I reviewed any significant number of FUNimation titles was around the middle of last year and I have since upgraded my AVR. Secondly this always ONLY happens to me with FUNimation discs. I have to keep pausing, going back a few frames and playing again to get the audio to lock up with the video again. I thought at first this could be anime related, but it doesn’t happen with any titles from, say Sentai Filmworks or NIS. Doesn’t happen with Disney or Studio Ghibli releases. Something weird is going on.

There isn’t much included. The typical textless opening and closings, a U.S. trailer (no Japanese trailers or promos) and additional FUNimation trailers.

While C³ has lots of elements to like, such as the eye-catching character designs and some amazing action sequences, on the whole it feels like a series that doesn’t quite come together in all areas, right down to the cover art that sets it up as a darker series than it actually turns out to be, even though it touches on some dark themes. In the end, however, it’s satisfying, just not an outstanding series.