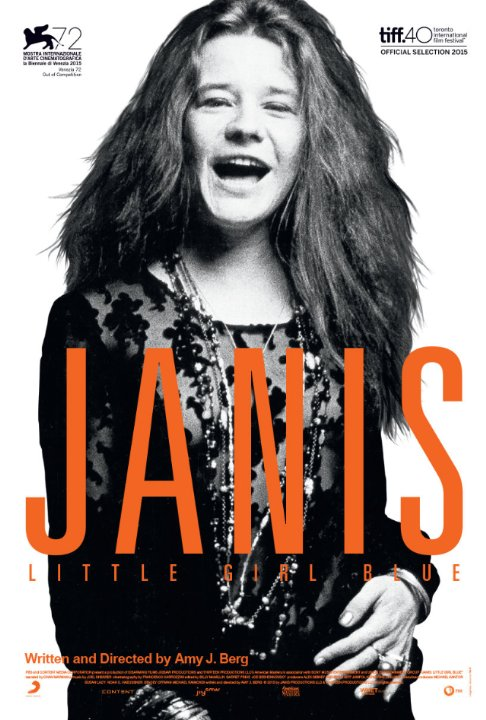 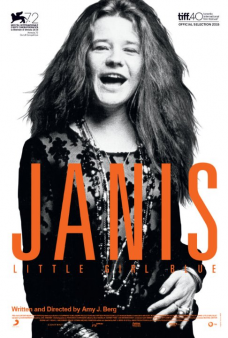 Using interviews with childhood friends, former band members, celebrities and her brother and sister, Oscar nominated filmmaker Amy J. Berg has written and directed a documentary that puts together the pieces of Joplin’s life, and how she became who she was and why she did the drugs that would eventually kill her. 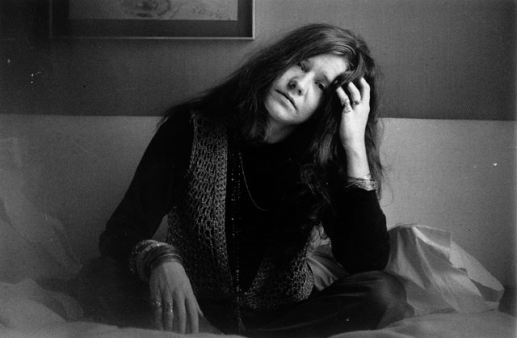 On September 30, 1970, Joplin gave an interview to journalist Howard Smith, an interview that took place just a few days before her death, who asked her why she sings. Her response was: “I get to experience a lot of feelings. You get to feel things in your imagination that aren’t even true. That’s why I like music. It’s creative and creates feelings.” Other snippets of this interview are interspersed in the documentary, where she discusses her life. “Little Girl Blue” also uses Joplins’ actual letters to her family where she expresses lots of hope, and doubts, about her life, even when she was at the pinnacle of her career.

I’m not old enough to remember Joplin. My memories of her involve watching Bette Midler’s astonishing performance in ‘The Rose’ as a Janis Joplin-like character who goes through a series of men and drugs. And ‘The Rose’ was loosely based on Joplin’s life.

Joplin was born in Port Arthur, Texas in 1943. While growing up, she admits to never actually fitting in at school. A childhood friend says that it was a really good town to grow up in, but Joplin never thought so. She was always a rebel, always looked different to the other kids, sort of like a beatnick. And she was voted ‘ugliest man’ in college. She got kicked out of the school choir for not following directions. And while she was younger she never actually thought that she would get older.

But Janis knew she loved to sing, and while in college she knew her voice was special. It was in 1962 in a club in Austin, Texas where she first got up on stage and sang. The following year would see her go to California and her life would never be the same. “A lot freer and you can do what you want to do,” Joplin says of California. But she was in conflict with herself all the time, and started shooting up with fellow musicians. Her drug habit got so bad that all of her friends chipped in to send her back home. But she made a return to San Francisco and hooked up with the Big Brother Holding Company (BBHC) and never looked back. And Joplin was becoming a star – with her Otis Redding-like voice, hanging out with other celebrities including Andy Warhol. Members of BBHC speak of the time they shared with Joplin, the highs and the lows. 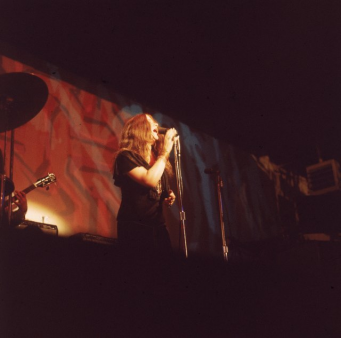 A turning point in BBHC was their appearance at the Monterey Pop Festival. Joplin wore gold bell bottom pants, and received a standing ovation, including from Momma Cass who was in the audience. Footage of this performance is in the documentary, and it is riveting. Joplin would find herself on the cover of Newsday shortly thereafter.

Now newly signed to a high profile record deal with Colombia, BBHC’s album Cheap Thrills went gold in three days. Footage of Joplin and the band in the studio shows Joplin in great form and taking charge during the recordings. The band during this time lived both in San Francisco and in the famous Chelsea Hotel in New York City. Joplin would also often appear on the Dick Cavett television show, with Cavett reminiscing about the interviews and how he can’t remember if they had sex or not.

But Joplin was becoming a bigger star than her band, and soon enough she left them to form her own band. She was still living the rock-n-roll lifestyle – planes, fur coats, and drugs, lots of drugs. The pressure for her to succeed was huge and she was carrying around all this weight. Ultimately, she didn’t know how to manage her new band. But their world tour was a triumph, but it was not enough for Joplin. She was always jealous of the band members who always had women waiting for them after the show to go back home with, but she never had anyone. She made love on stage, and off stage she said that “all you’re left with yourself.” It was her performance at the groundbreaking Woodstock festival in 1969 where there were further signs of drug trouble. She clearly looked out of it, and band members say that she was in the toilet shooting up heroin before her performance.

She tried to kick her drug and alcohol habit by going to Brazil in early 1970. There she met a man who she fell in love with, and they went back to San Francisco together, but he eventually left her after witnessing her shooting drugs. Joplin also attended her 10th high school reunion where actual interviews show her dazed and confused. It’s a wonder no one at that time seemed to do anything about her drug problem, not even the people closest to her.

Joplin died in a Hollywood Hotel on Oct. 4, 1970. She had just finished recording her album Pearl, which would go on to sell 4 million copies and produce her biggest hit “Me and Bobby McGee.”After the funeral, her mother is seen reading letters from fans extolling how Joplin was “the mother of the blues;” it’s poignant and touching. Testimonials from Juliette Lewis, Melissa Etheridge and others discuss their feelings towards Joplin. ‘Little Girl Blue’ tells the story of a singer all of us have heard about but have never actually seen her sing. Janis: Little Girl Blue lets you witness this firsthand. It’s an excellent documentary with amazing footage of interviews and of the woman herself, in good times, and bad times.