The Durells in Corfu is loosely adapted from naturalist and author Gerald Durrell’s “Corfu” trilogy of novels. The series chronicles the eccentric family Durrell as they move from 1935 Bournemouth when widow and matriarch Louisa (Kelley Hawes, MI-5) uproots the family and takes them to the warm and sunny bosom of Corfu, feeling the family, especially her four children, have gone off the rails. There the Durrells hardly blend in, but the do begin to settle into their dilapidated house on the tiny Greek island, as her youngest son Gerald (Milo Parker) continues his fascination with all things wild, collecting every animal and bug he can come across, building his own private zoo and a friendship with a local naturalist; her middle son Leslie’s (Callum Woodhouse) fascination with guns and shooting things helps the family eat, but also earns him a run-in with the law; eldest son Lawrence (Josh O’Connor) struggles to get his non-existent career as a writer off the ground, and sixteen year old daughter Margo (Daisy Waterstone) seems more interested in finding a husband than a job.

The series doesn’t claim to faithfully adhere to Durrell’s novels and, in fact, it is more an amalgamation of certain moments from all the works combined, but updated for modern audiences. Really, a lot of what goes on here one can assume safely would not have happened with an English family or Greek natives in 1935. Just the sheer number of English-speaking Greek natives on tiny Corfu is a red flag. That certain mores from our modern times are transplanted to the past is another. The seemingly nonchalant attitude amongst the Durrells bout a character that turns out to be homosexual is truly an interjection of modern sensibilities. That said, there’s plenty to enjoy here from the gorgeous scenery to the at times witty repartee, even if it is often anachronistic. 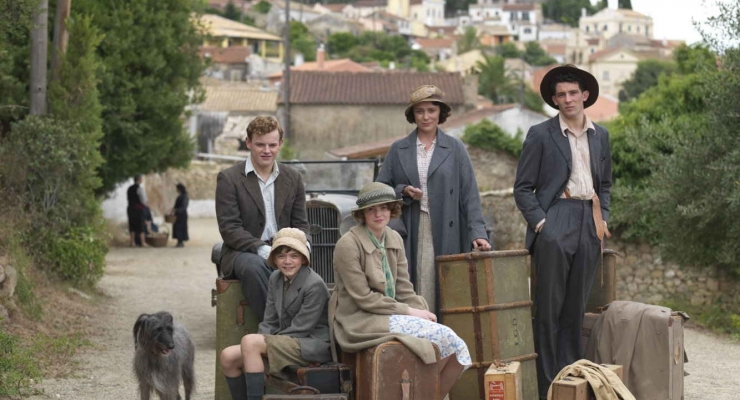 The AVC 1080p encodement framed at 1.78:1 is richly saturated and captures the beautiful colors of Corfu wonderfully. The contrast is strong, although there is some ever so slight washout in the shadows and one can also see clear, thin layer of video noise which presents itself more like natural grain, although this is a digital production, as all contemporary BBC productions are.

An English DTS-HD Master Audio 2.0 stereo track is the sole option, but the mix is a good one for this sort of material and provides exceptionally clear dialogue and a good balance between the natural sounds of Corfu, the dialogue, and the score, with good dynamics and frequency response.

The extras included are rather weak and are more like promotional materials than anything really worth sitting through. The informational value is limited, but certainly the best thing to watch with be the 8 ½ minute long Behind the Scenes featurette.

A pleasant series very loosely based on Gerald Durrell’s “Corfu” trilogy that will entertain you with its gorgeous scenery and lighthearted comedic touch, The Durrells in Corfu is another strong entry in the Masterpiece catalogue. The Blu-ray set looks good, though there isn’t much extra on it.