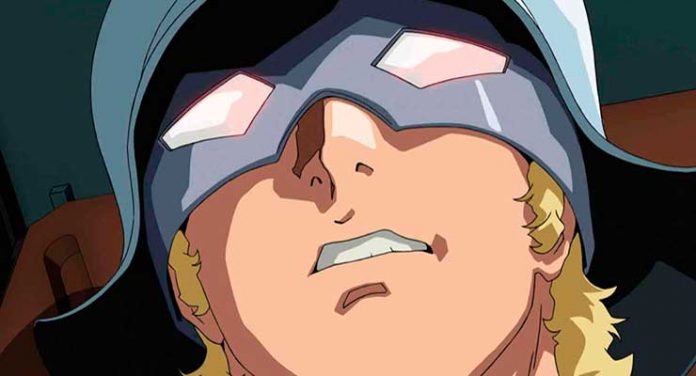 The four-disc set Mobile Suit Gundam: The Origin – Chronicle of Char and Sayla includes four one-hour OVAs based on the manga written and illustrated by Yasuhiko Yoshikazu. These stories form the basis of what is the origin story for the long-running phenomenon that is Mobile Suit Gundam, giving the details on the events that lead up to the devastating One Year War, the creation of the mobile suits, and the origins of infamous pilot Char Aznable.

The OVAs split into four titled story arcs, “Blue-Eyed Casval,” “Artesia’s Sorrow,” “Dawn of Rebellion,” and “Eve of Destiny”. They play out like a space opera akin to Star Wars, and fit right into the Mobile Suit Gundam world. Fans will adore the youthful Casval and Artesia, and will feel sorrow to see the hardening of Caval’s heart as he matures and turns toward revenge. The first, set in U.C. 0068, begins with the death of Zeon Zum Deikun, who dies from a sudden heart attack as he is giving a speech to declare the Autonomous Republic of Munzo’s independence from the Earth Federation. Riots ensue as Deikun’s underling Degwin Sodo Zabi ascends to power. Deikun’s children Casval and Artesia, along with their cat and Deikun’s old friend Jimba Ral are smuggled to Earth on a cargo ship to escape death at the hands of the Zabi forces.

This sets up “Artesia’s Sorrow,” which shows Casval, Artesia and Jimba three-years later taking refuge at an estate of on old friend of the Deikuns in Spain. After Jimba is assassinated by a Zabi mercenary, another close ally, the President of Texas Colony at Side 5: Loum, adopts Casval and Artesia. The siblings change their names to Édouard and Sayla and relocate to to the colony. They meet Char Aznable, who looks striking similar to Édouard. Édouard then bids farewell to his sister Sayla and goes off to avenge the death of their mother.

“Dawn of Rebellion” follows the rise of Char as we know him today. After a security issue at the spaceport Édouard and Char swap clothes in a bathroom and Char takes Édouard’s place on his flight. When he flight goes down, Édouard assumes Char’s identity and takes his place at the Loum military academy, instantly becoming one of its top ranking students. A couple years later, after having befriended Garma Zabi, Char becomes the leader of an open rebellion of the military cadets who lead an attack on a Federation garrison, forcing their surrender. The events will lead to the One Year War.

Finally, in “Eve of Destiny” we see the beginnings of the mobile suits. , Char gets a job as a mobile worker pilot at Jaburo, Zeon declares war on the Federation, marking the beginning of the One Year War.

The episodes are magnificently laid out and the intricacies and machinations are so complex in this arc that you can’ help but be completely enraptured by the world it creates. My only complaint is with the subtitle “Chronicle of Char and Sayla,” which is a bit of a misnomer. These episodes deal far more with Char than they do with Sayla.

That said, they’ve been brilliantly animated and designed; well written, drawn, and detailed. For those fans of this popular mecha series, picking this up should be a no-brainer. 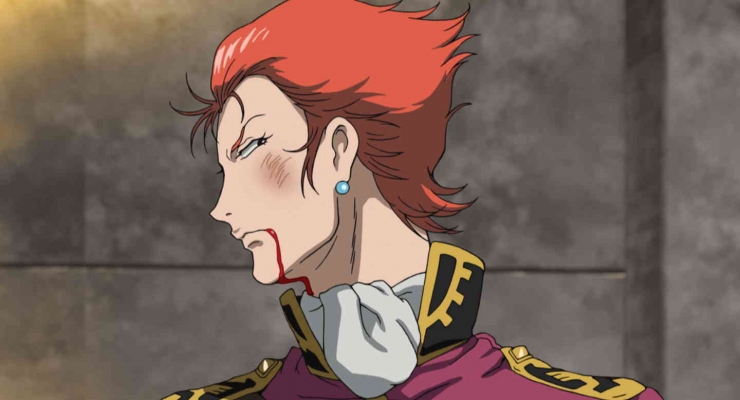 We get a solid AVC 1080p encodement to Blu-ray of Mobile Suit Gundam: The Origin – Chronicle of Char and Sayla from Sunrise/RightStuf. Apart from some aliasing around some of the CGI and very mild banding here and there, this is a very pleasing animated presentation with vivid, but not oversaturated colors and crisp details. The overall image is free from noise and compression errors.

Mobile Suit Gundam: The Origin comes to Blu-ray with the original Japanese soundtrack in LPCM 5.1 and LPCM 2.0 stereo as well as an English dub in LPCM 5.1 and LPCM 2.0 stereo. The 5.1 mixes are excellently done and mix a lot of discrete effects and dialogue into the surround channels to follow the action. One may hear a character enter a room from behind and then pan from the back across the side to the front, for example. The dynamics are superb, with nicely extended low-end range. Both Japanese and English casts are pretty good here as well, with Keith Silverstein doing a surprisingly good job in the role of Char.

There isn’t much included on Mobile Suit Gundam: The Origin, but the preview of Chronicle of the Loum should whet fans’ appetites.

Mobile Suit Gundam: The Origin – Chronicle of Char and Sayla packs a wallop of action, drama, and intrigue into its four episodes. The beginnings of the Gundam story are laid out with beautiful artistry and careful plotting.