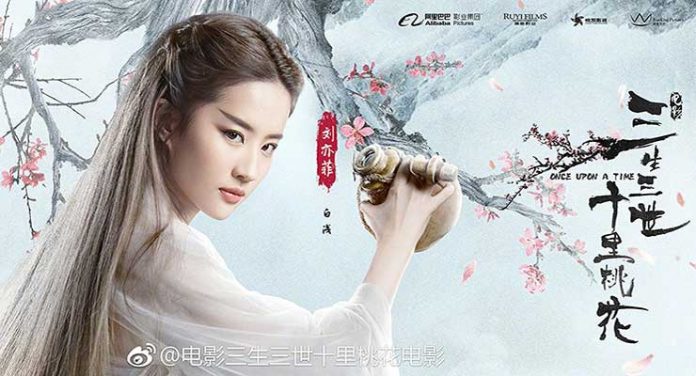 Immortal gods and mortals mix in this story about star-crossed lovers. Bai Qian, Liu Yifei (White Vengeance, next starring in the title role of Disney’s live action version of Mulan) is a goddess and monarch of the Heavenly Realms who has been engaged to marry the immortal Ye Hua (Yang Yang, Joyful Reunion) through an arranged marriage. A hidden history from Bai Qian and Ye Hua’s past threatens to split them apart as an enemy from the underworld clan returns to bring down Bain Qian and all that she holds dear.

Even as Once Upon a Time wows its viewers with stunning visual effects and a charming performance by Liu Yifei, its story is so confusing it becomes difficult to follow, making its mere 108 minutes runtime feel longer than it is. There are multiple plot holes, much of them having to do with Bai Qian and Ye Hua’s history. It is slowly revealed that the two of them may have known each other in a past life, and that is what becomes the sticking point as timelines become a little convoluted and difficult to fathom.

That said, the romantic elements despite the melodrama, are charming and fun and the interplay between Liu YiFei and Yang Yang is charismatic and appealing. They have an easy repartee that combined with the lavish visual effects and beautiful costumes makes Once Upon a Time like a pleasant reverie.

This film was shot in 4K on a Red Epic camera and a 2K DI (Digital Intermediate) was used in post-processing. The Blu-ray comes with an AVC 1080p encodement from that 2K master and it looks nearly flawless. I saw only one area where the mildest hint of color banding was present in some dark blue backgrounds. Apart from that, this is a colorful and clean presentation that is breathtaking to look at.

The film comes to Blu-ray with a rollicking Mandarin DTS:X immersive mix that fully engulfs you in the numerous sound effects such as nature sounds, dragons flying around, and high-flying sword battles, and explosions. There’s lots of height and directionality, excellent dynamics and low end, although things do tend to stay a bit too loud during the action sequences. The “X” channels add lots of height effects and expand the dimensionality superbly.

A flawed fantasy romance that plays on its directors’ strengths in the visual field but gets confusing, Once Upon a Time is rescued by the beautiful imagery and the charismatic performances of its leads. The audio and video on the Blu-ray are top-notch.