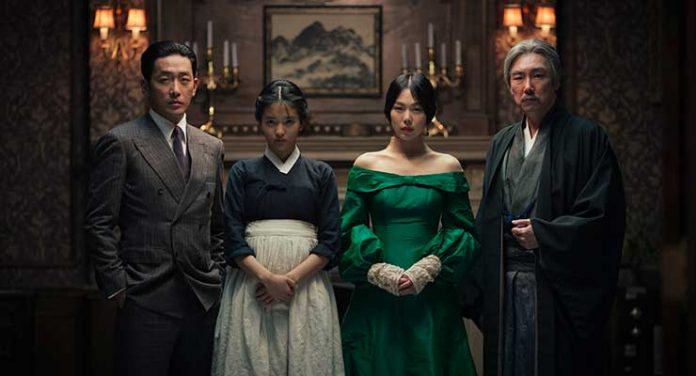 Writer/director Park Chan-wook is known for his visceral crime dramas with surprise twists like Oldboy or Lady Vengeance. With this latest entry, The Handmaiden, he enters into somewhat new territory, stretching the boundaries of his storytelling abilities and combining some of the elements he has visited in the past to create something new and enthralling in his latest Korean drama.

Kouzuki, who has abandoned his Korean roots and married into Hideko’s Japanese family, has raised the orphaned Lady Hideko since she was young and forcing her to read to him and his perverted friends from his collection of rare sex books and afterwards, perform some of the sex acts described with them. His plan is to marry his niece, become a real Japanese man, and take the fortune she is set to inherit.

Meanwhile, a Korean con-man posing as real Japanese Count, Fujiwara (Ha Jung-woo), schemes with Sookee to woo Lady Hideko, steal her away from Kouzuki and split her money amongst themselves. But as Sookee and Lady Hideko grow closer, they begin to gain feelings for each other and start to make plans of their own, unbeknownst to Fujiwara.

The Handmaiden takes place in three distinct parts, each one from a different perspective that unfurls the mysteries of what is actually going on. The events that take place in Part 1 take on a whole different meaning once seen in Part 2 and by the time we get to the final act, Part 3, everything becomes clear. It’s brilliantly done. Of course, Park also peppers the film with some of the sexiest love scenes ever put on screen between Hideko and Sookee, and these two actresses, gorgeous as they are, are far more than just window dressing. They act brilliantly.

As sexually charged as the film is and what may at a glance seem misogynist to someone just looking at it superficially, is in fact a very feminine positive film. Kim Min-hee plays Lady Hideko one minute icy cold, the next full of vulnerability, but she seems to be in control of everything from the opening moments. Kim Tae-ri’s Sookee is full of pie-eyed optimism and energy, and although she seems naïve, is tough and much more quick-witted than she looks. It’s the men in Park’s film that get the short end of the stick at every turn in this film, but that’s okay.

Apart from the sex, Park doesn’t disappoint longtime fans of his brand of Korean drama. The final act ramps up the violence the film takes a brief over the top sadomasochistic turn and one of the characters loses some fingers in a room filled with amputated sexual organs. 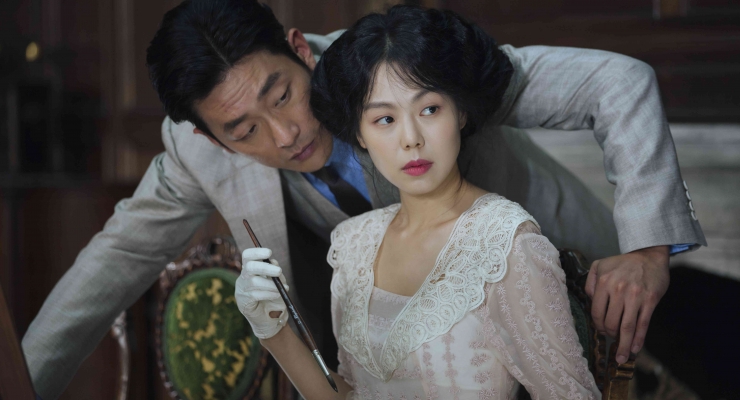 The Handmaiden was shot in 2K resolution on the Arri Alexa XT Plus with Hawk V-Lite Vintage ’74, V-Plus Vintage ’74 and Angenieux Optimo lenses in the anamorphic format; a 2K DI was utilized in post-processing. The film arrives on Blu-ray from Curzon Artificial Eye in a 1080p AVC encodement framed at 2.35:1. Given it is an original HD production, Handmaiden has a very film-like appearance and one could almost be fooled into thinking the textured imagery was shot on Super 35. That said, there are some telltale signs of its digital origins such as strong color banding in the shadows. The worst of this comes during a fire scene in Part 3 in the mental asylum. That said there is excellent amount of detail and color reproduction, just a few hints of washout in darker parts on the occasion, and solid contrast.

The Handmaiden comes with a bi-lingual Korean-Japanese DTS-HD Master Audio 5.1 mix (LPCM 2.0 stereo and Audio Description options are also included). The film is very dialogue driven and front-heavy, but there are opportunities for some atmospherics to liven up the often dry and still mix. A rainstorm surrounds us, movements of foley effects like doors opening and closing or footsteps are well place and widen the soundstage, and the score is well balanced in. The low end is somewhat anemic, but it is fine for this sort of material.

This standard Blu-ray release from Curzon Artificial Eye comes with only the Theatrical Trailer. There is a Special Edition release with an Extended Cut of the film, a 60 min. interview with director Park Chan-wook, and featurettes including a Making Of, the Cannes premiere, and cast interviews.