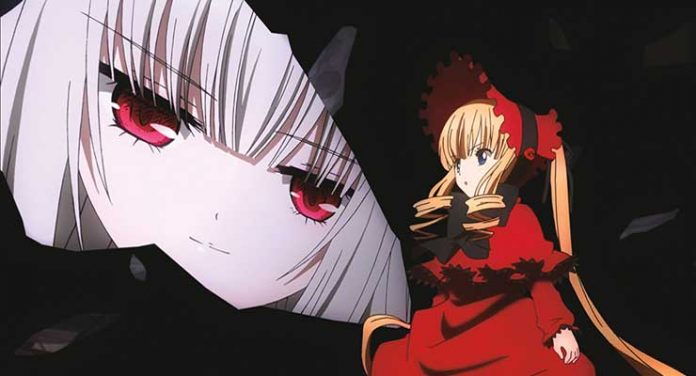 Rozen Maiden (ローゼンメイデン ) is a Japanese manga series written and illustrated by Peach-Pit. This anime series, Rozen Maiden: Zurükspulen is actually the fourth series based on this manga series, following Rozen Maiden, Rozen Maiden: Träumend, and Rozen Maiden: Ouvertüre respectively. I enter this franchise from this fourth series, which is also animated for the first time by Studio Deen. The Gothic fantasy series is a bit of a time warping series that follows the story of seven sentient porcelain dolls created by someone named Rozen who implanted them with a mystical crystal named the “Rosa Mystica” then sent them off into the world to find masters and to battle against each other. The object of this grand battle, known as “The Alice Game” is for the dolls to steal the “Rosa Mystica” from each other. When one doll has obtained all seven Rosa Mystica, then she can return to Rozen to become the perfect singular doll known as “Alice.”

In Zurükspulen one of these dolls, Shinku, appears in the life of a young middle shooler Sakurada Jun who, due to an illness, is staying out of school. Shinku is delivered to him in a box along with a letter asking if he will wind or not wind, and when he opens it and turns a key to wind her up, she comes alive, thereby drawing him into the Alice game when he accepts her rings and becomes her master. He soon finds himself sharing his home with a number of these dolls who are destined to battle each other to the death, even Shinku’s main rival, the raven-winged Suigintou.

Years later in an alternate reality, Jun receives the Shinku doll, but makes the opposite decision, to not wind. Then this alternate Jun’s life is disrupted when he begins receiving text messages from his younger self asking for help. Can one reality’s choices have an effect on the other?

I cannot comment on how true this series is to the Rozen Maiden franchise on the whole, but I can say that is seems to generally follow the norms of the Gothic genre in anime, other than the idea of living dolls drawing a boy into their interdimensional battle royale seems rather unique. The biggest asset of the production is definitely the resplendence of the character designs, however. The details sketched out in the dresses are eye popping, for sure. Shinku’s scarlet dress is the standout, but all the dolls looked beautiful and meticulously ornamented.

As for the story, there could have been some more fleshing out of the characters and a bit more work put into explaining the different planes of existence where the story takes place. Unless you really zone in, you are likely to miss what is going on and have to go back to figure out what’s what. There are also a couple of characters crucial to the resolution that don’t make much of an appearance until the end, making for what feels like a very rushed or heavily weighted finale to these episodes. 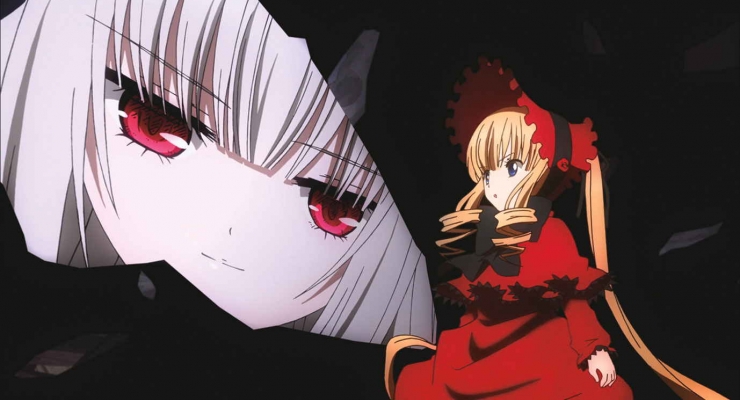 Sentai Filmworks offers up Rozen Maiden: Zurükspulen in an AVC 1080p encodement on Blu-ray that looks generally clean and sharply detailed. The primary colors pop nicely, especially the scarlet dress that Shinku wears. There is some noticeable banding in some of the fills, but it doesn’t do great harm to the overall pleasing look of this series on Blu-ray.

The original Japanese-language track and the English dub are included in DTS-HD Master Audio 2.0 stereo mixes. The sound is excellent given it is only stereo – it is very atmospheric, has a wide stereo image, and good dynamic range. My preference remains with the Japanese cast who add a real sense of mystery to their performances, but the English cast are decent, just not as moving.

This series has excellent atmosphere and beautiful imagery and the idea of sentient porcelain dolls is in itself quite spooky. I’ve been in a doll collector’s house, and those things are definitely the stuff of nightmares. That said, Rozen Maiden: Zurükspulen is only an average series. Not terrible, but not fantastic either.