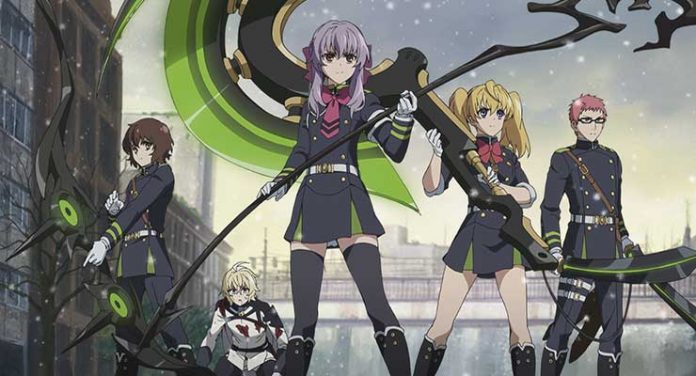 This is the full season of the anime adaptation of the popular manga series Seraph of the End written by Kagami Takaya and illustrated by Yamamoto Yamato with storyboards by Furuya Daisuke. Seraph of the End: Vampire Reign was directed by Tokudo Daisuke and nominally written by Seko Hiroshi, but original manga writer Kagami Takaya was fully involved with the story creations for the episodes, even plotting out storylines that had not yet appeared in the manga, so it makes sense that this is one anime series that is not confusing and has a really strong sense of character development and through line from beginning to end.

Seraph is set in a dystopian future where humanity has been overrun by vampires, after a deadly virus has purportedly wiped out the majority of humans. Vampires have now rounded most of what remains of people into walled cities where they are used as “livestock” that the vampires use for their blood. In such a city, the orphan Hyakuya Yuichiro has been raised for four years along with several other children from the same orphanage that have come to view themselves as family. One night, Yuichiro’s closest friend, his “brother” Hyakuya Mikaela, who had offered his blood to one of the vampire nobles in return for favors, comes to Yuichiro with a plan for escape. The two boys gather the rest of their family and sneak out, but their escape doesn’t go well and they find themselves surrounded by vampires. Only Yuichiro manages to get away, leaving behind his family for dead.

Four years later, Yuichiro is with the Moon Demon Company on the outside. They are a military organization of humans living in the dilapidated world beyond vampire control, dedicated to eradicating the vampire overlords. Yuichiro becomes a central figure in a group of young recruits who, mysteriously, all manage to quickly gain the ability to wield powerful “cursed weapons” – weapons possessed by demons that are the only weapons capable of killing vampires. Along with his squad members which include Hiragi Shinoa, the teenage girl who heads his division and has ties to the ruthlessly powerful family that controls the military; Saotome Yoichi, a timid and frail friend of Yuichiro who is trying to forget how he cowered under the bed when the vampires came and killed his older sister; Kimizuki Shihō, a tough guy who butts heads with Yuichiro, but is really kind on the inside and is fighting to help his sick sister; the somewhat tsundere character Sangū Mitsuba, who initially hates Yuichiro, but begins to like him and has a deep sense of guilt over her past in the military when her actions got a comrade killed; and Ichinose Guren, the somewhat irascible commanding officer who can use a powerful demon weapon, Yuichiro sets out on his path of revenge.

Yuichiro will find that getting revenge is a lot more complicated than he thought and that he will need to use teamwork rather than go it alone, especially when he finds that his brother Mikaela may not have died on that fateful night that has been driving him for the past for years and that Mikaela may be working for the vampires now.

Seraph of the End is a beautiful looking anime series, although not in the usual way. Much of the work is put into the character designs, and they are superbly done Gothic, sleek, clean lines, with very detailed costumes. This also translates into eye-catching action sequences and bone-chilling horror in some of the special effects related to the demon weapons. The backgrounds are not all that eye-catching, however. They are mostly flat, watercolor looking drawings, with drab greys and earth tones. There’s no dimensionality to them at all. This does in some ways help to create a sort of atmosphere, a sense of dread and a heightened sense of dilapidation, so it doesn’t come across as laziness or an afterthought. 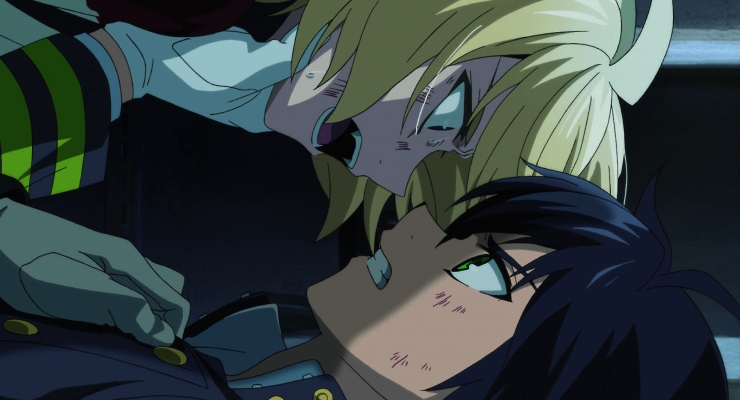 Seraph of the End: Vampire Reign arrives in an AVC 1080p encodement framed at 1.78:1 on Blu-ray from Funimation. It looks mostly crisp and faultless, but some areas in a few frames few and far between show very slight color banding and at the worst end of the spectrum some very strong compression noise in the very darkest areas of the color fills. Overall, these quick, passing moments do not detract from what is a pleasing effort on disc and a lot of people may not even notice them depending on their displays, screen size and viewing distances.

The original Japanese-language mix is offered up in Dolby TrueHD 2.0 stereo as well as Funimation’s English Dolby TrueHD 5.1 dub. I noticed none of the issues I tend to have with Funimation soundtracks on the Japanese track, such as wavering lip synch or extremely low mastering volume, but that said it did still lack a bit of dynamic range. The 5.1 mix was average, and did not have that tight, 360-degree soundfield and solid use of surround effects one would normally get in a true reference mix. The low end sounded a bit muted. The Japanese voice cast for Seraph of the End is stellar, a bit hard to match for the English dubbers who do their best, but don’t reach the same level of intensity.

This set is stuffed with four audio commentaries, two video commentaries, the usual array of clean openings & endings, promos, trailers, and part 1 & 2 “bonus” animations that have a slightly more comedic element to them than the original scenes. Additionally, we get the beautiful packaging, art cards and hardcover art book. See below for details.

This powerful dystopian Gothic series that traces the personal growth of an orphan in the face of horror, Seraph of the End: Vampire Reign get a magnificent collector’s edition issue from Funimation. The price is a bit steep, but given the quality of the content and the extras and packaging, this is one that may actually be worth it for the serious anime connoisseur.