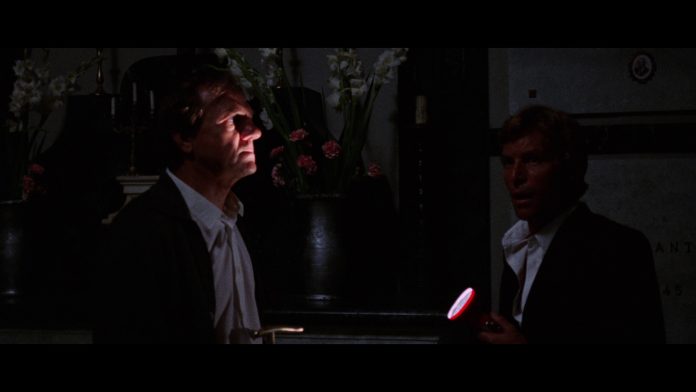 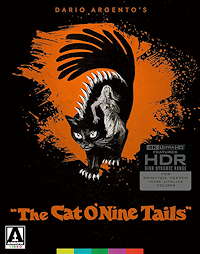 When a man accidentally falls in on the tracks in front of the train of a celebrity arriving in Turin, newspaper reporter Carlo Giordani (James Franciscus) investigates the incident further and gets help from blind, retired news reporter Franco Arnò (Karl Malden). Their investigation leads them to a pharmaceutical company and its new top-secret experiments and to the reality that the accident may have been a murder. There is soon a series of killings to cover up the initial murder and they both become a target of the killer themselves.

In typical Argento fashion, Cat o’ Nine Tails is a hyper-stylized and incredibly suspenseful thriller that takes the influences from Hitchcock films like Psycho and Vertigo and turns them up to 11. The chiaroscuro, the mise en scène, the off-kilter camera angles, and of course the shocking twists, all lead the viewer on a labyrinthine journey of violence, mystery, and eroticism. While this film is not on the same level of other Argento films, it is still filled with a rich panoply of enticing Argentoisms that make it worthy of reassessment.

This presentation of Cat o’ Nine Tails is a new 4K restoration from the original negative by Arrow Films presented in a 2.35:1 HEVC 2160p (4K UHD) with Dolby Vision (HDR10 compatible) encodement. This transfer steps up the overall video quality a notch over Argento’s first film, The Bird with the Crystal Plumage, which isn’t surprising, given he likely had a little more money and leeway, which also led to higher picture quality here. The Arrow restoration looks good, with a natural grain structure that looks even finer and more controlled than on Arrow’s 2018 Special Edition Blu-ray release. The flesh tones look generally natural although I did see a hint of red push from time to time. As for the Dolby Vision, it really sparkles in this release. There are plenty of opportunities for specular highlights to ‘pop’ with the many set pieces in the dark, such as when Karl Malden and James Franciscus are making their way through the graveyard with the flashlight or glints of light on the glasses of milk in Franciscus’ apartment. They don’t use the HDR in a gimmicky way, but to serve this classic film, and it looks very good. The wider color gamut helps a lot as well, like with the deep red blood during fist fights. This is a well-done application of HDR on a catalogue release.

Cat o’ Nine Tails arrives on 4K Ultra HD with both English and Italian versions in DTS-HD Master Audio 1.0. Technically, both are dubs with the film having been recorded in English and then redubbed in English and Italian. I would say that both fully restored soundtracks sound very good even though the sound is limited to the center channel. If your center channel is good enough, you get a quite full and clean mix that also presents the pseudo-jazz score nicely as well.

Arrow Video as per usual loads up this limited edition release with bonus features and collectibles. Be sure to check out the very entertaining audio commentary by Alan Jones and Kim Newman, with the two of the them giving a running, friendly, conversational, and very listenable commentary that provides lots of detail and background information.

A satisfying giallo from the auteur that looks and sounds wonderful in this 4K Ultra HD limited edition from Arrow Video.