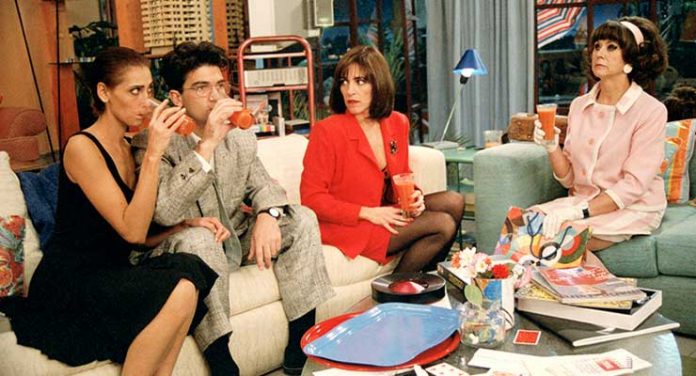 A farce that practically exists in its own parallel universe put together just as well as. any from Oscar Wilde, perhaps even better, director Pedro Almodóvar’s hot-colored Women on the Verge of a Nervous Breakdown is a quick-paced jaunt through what one could mistake for a psych ward at times, but it happens to take place mainly in the living room of its protagonist.

Pepa (Carmen Maura) is suffering from a break-up and depressed that her lying boyfriend won’t talk to her, distraught, she decides to commit suicide by dosing herself with an overdose of sleeping pills by outing them in a batch of gazpacho. Of course, in Almodóvar’s kinetic world, Pepa’s step into the great beyond is disrupted by her friend Candela (María Barranco) who throws herself over Pepa’s balcony in her own suicide attempt. Candela’s distraught that her Shiite boyfriend turns out to be a terrorist and was simply using her and her place to plot a hijacking and now she’s an accomplice. Obviously, her bad boyfriend problems outweigh Pepa’s.

Enter Carlos (a very young and dashing Antonio Banderas), the son of Pepa’s ex, and his fiancée Marisa (Rossy de Palma). Carlos instantly falls for Candela after saving her from her near-death, despite having Marisa right there with him. Meanwhile, after having forgotten all about trying to off herself, Pepa’s deadly gazpacho gets imbibed by Marisa who passes out leaving Carlos all the time in the world to try to romance a still worried Candela. But wait…there’s more. The tacky, heavily made-up former girlfriend of Pepa’s ex, Lucia, escapes from the hospital and shows up at Pepa’s flat just when the police show up to question Candela about the terrorists who’ve now made it on the news. It just may be time to bring out the gazpacho again.

Almodóvar had successes in Spain and beyond before Women on the Verge of a Nervous Breakdown with controversial films like Matador and Laws of Desire, but it was with this film that he really became an international break through and well-known as a farcical director who was well adept at directing for women. The vibrant color palettes, almost surreal world of Women on the Verge of a Nervous Breakdown that harkens back to works from the Spanish great Luis Buñuel and the mastery of dialogue established Almodóvar as one of the greats of the era. He would go on to create such delights as Tie Me Up! Tie Me Down! and Volver, but perhaps none of them was as fresh, gripping, or comically charged as this 1988 gem. 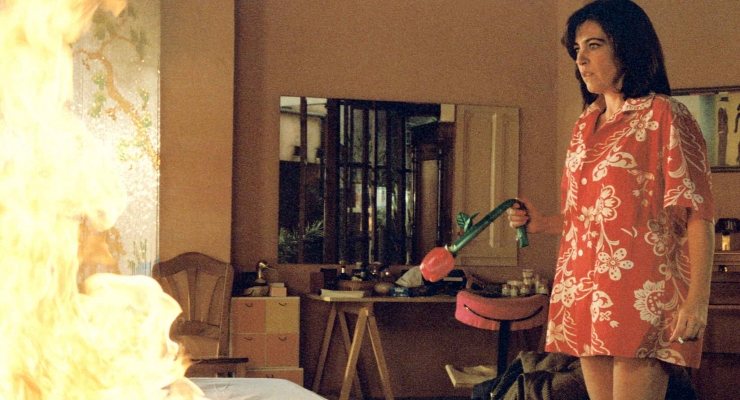 This new digital transfer of Women on the Verge of a Nervous Breakdown was created in 2K resolution on an ARRISCAN film scanner. The restoration was undertaken from the 35mm original camera negative at Deluxe Madrid, under the supervision of director Pedro Almodóvar and executive producer Agustín Almodóvar. It is presented on Blu-ray in its original 1.85:1 framing in an AVC 1080p encodement that looks luscious. There’s a beautifully organic layer of grain that offers up lots of texture and apart from the occasional hint of softness that is inherent to the production not the transfer, we get strong, crisp details and vastly extended depth of field. Colors are robust and primaries really ‘pop’ nicely without looking fake. Just take a look at Chapter 4 when Pepa starts slicing up the tomatoes to make her infamous gazpacho to see how beautiful the color reproduction is.

Women on the Verge of Nervous Breakdown originally ran in theaters with an Ultra Stereo soundtrack. This is technically the same as Dolby Stereo which was an optical sound encoding format for 35mm with Left, Center, Right and Surround channels with a matrixed surround sound. The Criterion Collection includes this “stereo surround” in a DTS-HD Master Audio 2.0 track that can be heard in its original matrixed surround form if your AVR allows DTS-HD Master Audio to have Dolby Pro Logic processing applied. There is also an alternate DTS-HD Master Audio 5.1 mix. I used the 5.1 mix as my reference, but found that on my AVR with NEO X processing, the 2.0 mix sounded quite good as well. The 2.0 surround track was remastered from a 35mm magnetic track. Both soundtracks sound clear with little noise, but also barely noticeable ambience in the surround channels. Stereo effects are good.

Criterion includes a solid set of new interviews with the director, his brother (executive producer Agustín Almodóvar), and actress Carmen Maura, plus an interview with film professor Richard Peña. These all provide a lot of information and perspective on the film its creators and the cast.

I have fond memories of Women on the Verge of a Nervous Breakdown. It was one of a series of films in the late ‘80s/early ‘90s that I viewed when I started getting into film as a serious art form that also included Tie Me Up! Tie Me Down!; Drugstore Cowboy; Jamón, Jamón; and a few others. Watching it again after many years on this Criterion Collection Blu-ray is like seeing it with my young eyes again. This is a gorgeous transfer of a true classic.