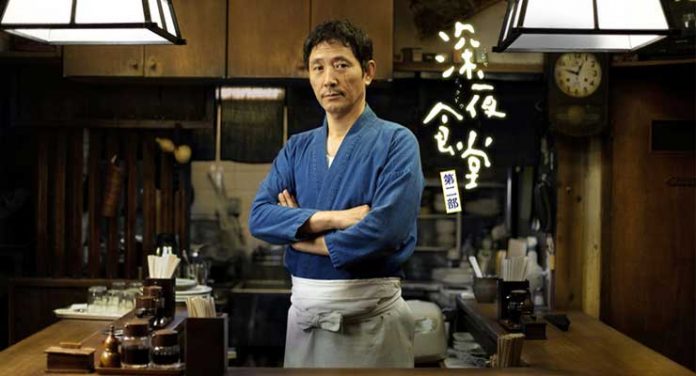 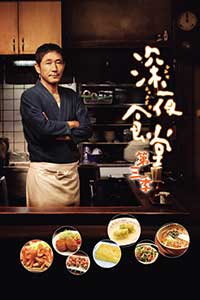 Three years ago, Netflix introduced me to a Japanese television show, Midnight Diner: Tokyo Stories, based on a popular manga (comic book) series. Netflix now resurrects this show’s original first three seasons bearing the shorter title Midnight Diner. Set in Tokyo’s Shinjuku district, this diner is a modest 12-person eatery open only from midnight to 7 AM and run by the scar-faced Master (Kobayashi Kaoru) who besides serving food also serves as the show’s narrator. Cleverly worded subtitles abound and will often make non-Japanese viewers or gaijin laugh out loud.

There is a group of diner “regulars” like the three “Ochakuze” sisters who bemoan their single status, the transvestite Kosuzu who lusts after the yakuza Ryu, the elderly Mr. Chu who has an opinion about nearly everything, the horny but luckless photographer Komichi, and the philosophical Katagiri. The “official” menu has only pork miso soup, beer, sake, and shochu, but the Master will cook up anything at customers’ requests as long as he has the ingredients.  Each episode has a similar construction: it is titled after the particular dish of the evening that has special significance for the new guest at the diner, and, during the introduction, we get to see how this dish is actually prepared.

The diner’s main ingredients are really its patrons’ personal stories and the three seasons run the literal gamut of adult situations. As examples are the striptease artist Marilyn who regularly goes through a string of boyfriends; Mr. “Erect” Oki, a famous porn star who gets rejected by his mother; the boxer Katsutoshi who loses his big bout but gains a girlfriend and her young daughter; former pop star Rinko whose memories of her long-lost father are rekindled by a dish of yakisoba encircled by seaweed; Bento box cook Shoji whose pretty new girlfriend turns out to be a former sex worker; wealthy Hitomi who falls for an older man only to discover that he has been a long-time fugitive from the law; and scam artist sisters Noriko and Sachiko who get “engaged” to wealthy men and pilfer their accounts.

Creator/writer Jaro Abe has economically crafted thirty episodes, each running for only 22 minutes but jam-packed with the shifting emotional states of the featured characters portrayed by a cast that could hardly be bettered. It is, in fact, the focus on character development accomplished in very brief time spans that makes Midnight Diner a series such a terrific watch from beginning to end. While we get to know the “regulars” quite well, their responses in a given episode are not always predictable as their own circumstances often vary. For viewers unfamiliar with contemporary Japanese mores, this show will be an eye-opener, particularly on the part of the often quite independent-minded women who frequently outshine their male counterparts. Overall, I found the first two seasons to play a bit better than the third just because, as a group, their stories tended to be more engaging. This is most entertaining television fare that recalls legendary American sitcoms like Cheers, Alice, and Taxi which also featured a regular ensemble cast in their places of business. To borrow a well-worn phrase from the advertising world, “Try it, you’ll like it.” Highly recommended.