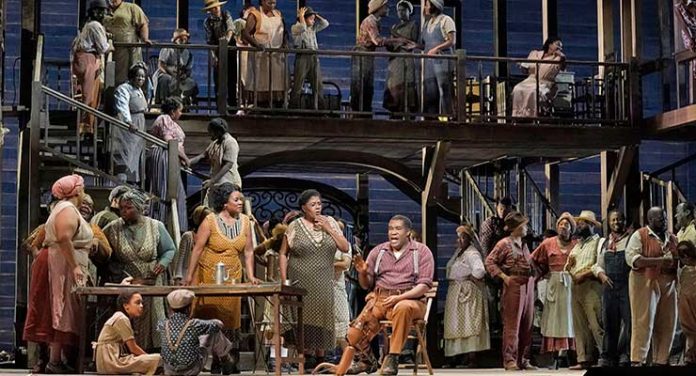 October 5, 2019. According to Metropolitan Opera’s General Manager, Peter Gelb, obtaining the rights to George Gershwin’s original Porgy and Bess, last staged in this house in 1990, proved to be quite a challenge. After nearly a thirty-year wait, the audience’s patience was rewarded with the debut of James Robinson’s new production of this iconic American opera during the current season. Seeing and hearing Gershwin’s complete score cements this opera’s status as one of the greatest operatic works of the 20th-century, if not of all time.

The setting is Catfish Row, a Black tenement in the 1930s Charleston’s waterfront district where hardworking but poor families contend with the stark realities of their daily lives. Porgy (Erich Owens), a crippled beggar, falls for the fallen woman Bess (Angel Blue), a prostitute addicted to cocaine or “happy dust.” Bess is held in thrall by her pimp Crown (Alfred Walker) who soon kills one of Catfish Row’s residents, Robbins (Chauncey Packer), after losing a dice game. When he flees the scene, Bess moves in with Porgy. Their brief love affair gets interrupted when Crown returns, and, after a brief struggle, he is killed by Porgy. The crippled man gets taken to jail for refusing to identify the man whom he has just murdered, allowing local drug dealer Sportin’ Life (Frederick Ballentine), to hook Bess once again on “happy dust” and take her with him to New York. As the curtain falls, Porgy has been released from jail and gets in his wheelchair, vowing to find Bess, no matter how long the journey will be.

Michael Yeargan’s rotating set shifts from the bare rooms on Catfish Row to the showy boardwalk at Kittiwah Island and back again, an economical use of space on the Met Opera’s huge stage that deliberately keeps its focus on the large cast. Conductor David Robertson elicits a magnificent realization of Gershwin’s music, revealing its complex rhythms, jazzy influences, and Gullah-based melodies that make this score unique among American operas. Director Robinson and choreographer Camilla A. Brown deserve equal billing for their portrayal of these simple folks who celebrate life and then commiserate in death.

What sets the current production apart from its Met predecessor is that every single artist (with the exception of Ballentine who is making his Met debut) has already performed on this stage in mainstream operatic repertory.  Angel Blue invests Bess with a heart and soul that makes us truly want her relationship to succeed with Eric Owens’s Porgy, demonstrating why he owns this role for his generation. South African soprano Golda Schulz delivers a moving version of one of the opera’s many chestnuts Summertime, while the stalwart Latonia Moore is simply the best Serena, Robbins’s widow, that I have ever heard. Additional luxury casting is provided by the legendary mezzo-soprano Denyce Graves as Maria. The real scene-stealers prove to be soprano Leah Hawkins, a member of the Lindemann Young Artists Development Program, who adds a coloratura touch to the “Strawberry Woman,” and Chauncey Packer back as the cupidinous “Crab Man.”

Newcomers to the Met Opera, or opera in general, will readily find their comfort zone when presented with a long list of Gershwin numbers that have become vocal standards, including I Got Plenty of Nuttin,’ and It Ain’t Necessarily So. Until you have heard this work performed in its entirety with legitimate opera singers, full orchestra and large chorus, you have not heard the wide range of musical expression that Porgy and Bess has to offer. I would hope that, as opera lovers, we have finally moved beyond the narrow view that this work represented the white musical establishment’s appropriation of African American culture. Porgy and Bess really does belong to all of us and, fortunately, there will be three more performances in October, followed by six in January 2020, and a final Saturday matinee on February 1, 2020, that will be broadcast live in movie theaters around the world.