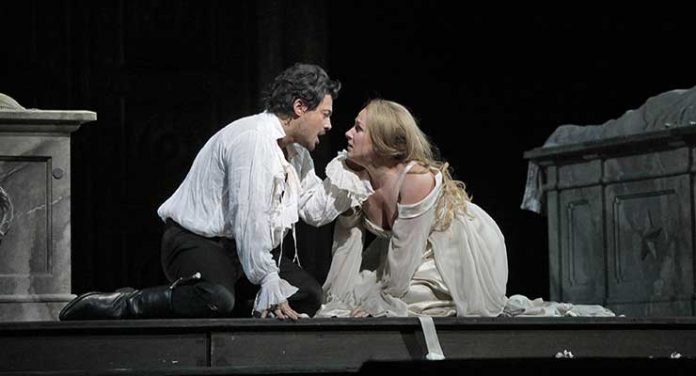 The Capulets and Montagues are rival Veronese families. In accordance with the customs of the period, Juliette (Diana Damrau) has been promised to marry a nobleman whom she does not know. When she meets Roméo (Vittorio Grigolo) at the Capulets’s masked ball,  sparks immediately begin to fly. Later that evening, the young couple declares their love for each other at Juliette’s balcony and this becomes the transformative moment of their brief story. In short order, Frère Laurent (Mikhail Petrenko) performs their wedding ceremony in his monk’s chapel, and their future looks bright but we know that it will turn out to be otherwise.

The young page Stéphano (Virginie Verrez) taunts some Capulets and a duel ensues. Mercutio (Elliot Madore), a cousin of Roméo is killed in the ensuing swordfight, and after Roméo has avenged this death, he is exiled by ducal decree. Juliette and Roméo  share a final conjugal night before he must leave Verona forever. With Frère Laurent’s assistance, Juliette receives a sleeping potion that will temporarily simulate her death so that she can later reunite with Roméo in the family crypt. Unfortunately, Roméo is unaware of this ruse and when he enters Juliette’s tomb, he really believes that she has died. The distraught youth takes poison and as he lies dying, Juliette, believing that all is lost, fatally stabs herself. The two lovers finally achieve in death the ultimate union that they could not accomplish in life. 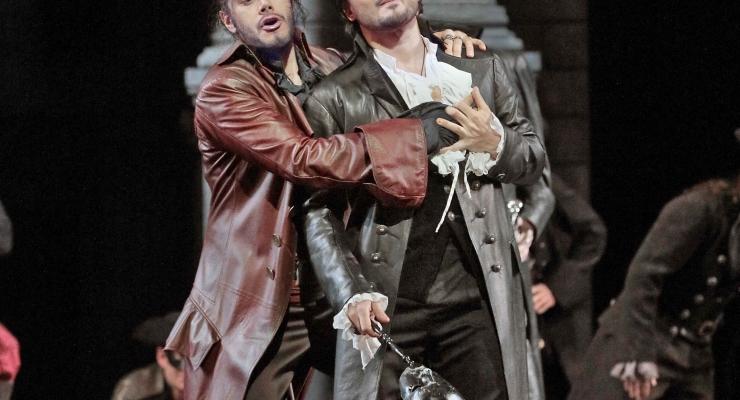 Watching soprano Diana Damrau and tenor Vittorio Grigolo negotiate these iconic and very demanding roles with great vocalism,  passion, and complete investment in character was incredibly thrilling. Opera is not just about getting the notes right or putting on costumes and makeup. It is about actually becoming the human beings of this music drama and making the audience really care about what happens to them. In this Metropolitan Opera performance, all the stars aligned and we are rewarded with terrific sings, and solid conducting by one of the best guest conductors at the Met Opera, Gianandrea Noseda. Although none of the remaining cast quite reaches the heights set by Damrau and Grigolo, bass Petrenko delivers a very sympathetic monk and mezzo-soprano Verrez (a 2015 Met Opera Auditions Winner) tosses off her trouser role with aplomb.

Michael Yeargen’s rather massive sets form a town square that morphs into an intimate balcony scene, a monk’s chamber, a floor length bed complete with a very long sheet, and finally a crypt. While most set changes (the only intermission occurs in the middle of Act III) work fairly smoothly, the penultimate scene that has Juliette wrapping herself in the flowing “bed sheet” only to faint before she is married to Count Paris and the final scene in which a supposedly unconscious Juliette “revives” and walks to her tomb made little if any dramatic sense. Nearly all of the staging has an oppressive darkness that makes some of the often quite large cast difficult to discern.  As if in response, Gary Halvarson’s camera crew provides enough close ups that offer at least some relief from the sets’s crepuscular shadows. I understand that director Sher’s concept was that R&J is a “dark” opera but surely more moments of light could have been shed on the stage during its three and a half hour running time. Catherine Zuber’s costumes that place this opera in the 18th century are generally attractive and period appropriate. Special mention should be made as well to the consistently marvelous performances of Donald Palumbo’s chorus, a Met Opera treasure if there ever was one.

Roméo et Juliette will complete its run with the present cast near the end of January and returns in March with some new and very exciting principals under the baton of Emmanuel Villaume. If you want to catch the Damrau-Grigolo fireworks, they will be reignited on January 25th and 28th. More information about this production and the remainder of the 2016-2017 season can be found at the company’s website www.metopera.org.