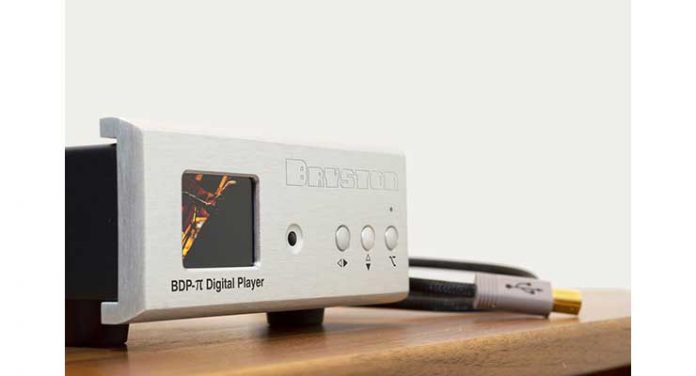 I should be listening to “As Time Goes By” instead of Malcolm Arnold’s hi-res rendition of Beckus the Dandipratt Overture, as it has been three and a half years since I last got a Bryston digital player (the BDP-2) to evaluate. Those who prefer to get their digital music from downloaded files rather than from physical discs have been well aware that eliminating the vagaries of a spinning disc makes for better sound. Bryston figured this out six years ago when they introduced their revolutionary BDP-1 digital player. In keeping with this Canadian audio company’s move to bring digital music sources to new and hopefully younger listeners, their design team has come up with a new line of compact digital devices like the BOT-1 optical transport, the BUC-1 USB converter, and now the BDP-π digital player, the subject of this review.

Setting it up is as easy as Pi

Built upon the Raspberry Pi® small computer card and HifiBerry® platform, the BDP-π is an improved version of the original BDP-1, takes up one third of the counter top space of its predecessor and will handle files with resolutions ranging from 44.1kHz/16-bit to 192kHz/24-bit. The front panel has a very small display window that provides visual access to current file data, cover art or a VU meter. Scrolling up, down, forward or back is accomplished by three small front panel buttons. The small power light goes green when everything is on and working properly. The rear panel has, from left to right, an HDMI output (limited to 2-channel 48kHz/16-bit resolution), four USB 2.0 ports, and an Ethernet connection, and IR port, S/PDIF coaxial and Toslink outputs, a status light (green is good, blue means insufficient voltage, and red means excess voltage), an on/off switch, and a DC 12V/2A power port for the outboard DC power supply.

Operating the BDP-π can be accomplished from the front panel, but I found it easier to use the BR-2 remote control that I already had. It was even easier to run the playlists when I connected with my MacBook Air (https://bryston-bdp-pi.local) or my iPad using the MPaD app. The current firmware of the BDP-π is Bryston’s Manic Moose that is also used in the BDP-2. Once the digital player is located on your network, a home page opens up the Media Player view that enables playback of entire albums, each track, searching by artist or title and constructing playlists. Switching to the Dashboard view shows the playback options of MPD (default), Roon, or Shairport-Sync. There is a built-in “bRadio” that offers access to numerous Internet stations and music genres, a virtual front panel, and access to the lossless Tidal streaming music service (if you have a subscription). This screen also enables the updating of the firmware, an operation that I performed successfully during this review.

The BDP-π like the other BDP streaming players requires an outboard DAC that can be connected via S/PDIF and Toslink cables. For this review, I hooked the player to Bryston’s BDA-2 DAC via S/PDIF. To level the playing field, I had the opportunity to do a side-by-side comparison with my BDP-2 with identical playlists on matching thumb drives through my reference high-end system: Pass XS preamplifier, Pass XA-100.8 monobloc amplifiers, and Martin Logan CLX speakers. This system is intrinsically “musical” rather than “analytical” but it will reveal any significant sonic anomalies in the source material that it receives.

Slicing up the Pi

Having a vast library of digital files (4 terabytes’ worth to be exact), I ran the BDP-π through its paces with music ranging from classical to Delta blues and at all the resolutions that this player can stream. The Eiji Oue/Minnesota Orchestra performance of Stravinsky’s Firebird Suite (176.4kHz/24-bit WAV) has a rafter-rocking bass drum entrance at the 9-minute mark that resounded loud and clear, as streamed from the BDP-π. Matthew Hall’s opening of the J.S. Bach Goldberg Variations (44.1kHz/24-bit FLAC) was clean as a whistle. Elisabeth Schwartzkopf’s collaboration with George Szell and Berlin Radio Symphony Orchestra was intimate and moving on Richard Strauss’s Vier Letze Lieder (96kHz/24-bit FLAC). Moving over to the jazz studio, the pairing of Keith Jarrett’s piano and Charlie Haden’s upright bass on Jasmine (44.1kHz/24-bit) revealed the natural acoustic of both instruments to perfection and was quickly followed by the iconic “Blues on Bach” by the Modern Jazz Quartet (192kHz/24-bit FLAC) sounding both sensual and precise. The old blues master Honeyboy Edwards rasped out his signature tune “Shake ‘em on Down” (176.4kHz/24-bit WAV). Today’s unclassifiable musical darling, Esperanza Spalding, teamed up with Gretchen Parlato on Inutil Paisagem, a gorgeous vocal duet backed by Spalding’s string bass (96kHz/24-bit FLAC). Many more files streamed from the BDP-π with nary a hitch during my binge listening sessions, interrupted periodically by my attentive wife who frequently reminded me that it was way past my bedtime.

Comparisons with my upgraded BDP-2 seemed almost unfair since this player goes for more than twice the price ($3295) of the BDP-π ($1295). But playing the same playlists showed how closely the younger sibling emulated its big brother. While the BDP-2 offered better articulation,  more warmth and a deeper soundstage, the degrees of separation in these differences on most material were subtle rather than seismic.

The listening habits of today’s audiences are changing, particularly for its younger members who like small packages that are easy to operate. In this respect, the BDP-π will fill the bill for many millennials and when mated with any one of the inexpensive high-performing digital-to-analogue converters will deliver a killer playback system for less than two grand. The BDP-π is small enough to make a great stocking stuffer. Hint, hint…