Counting Crows: August and Everything After DSD Download Review 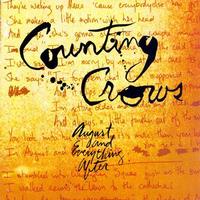 Sometimes groups and hit songs seem to come out of nowhere and this is certainly the case with Counting Crows, a San Francisco band that was Adam Duritz (lead vocals, piano), David Bryson (guitar), Charlie Gillingham (accordion, keyboards), Steve Bowman (drums) and Matt Malley (vocals, bass) at the time of this 1993 recording.  The group’s name comes from a British divination rhyme that is recounted in the song, “Murder of One.”  As you listen to this album, you will hear the obvious influences of Van Morrison (“Mr. Jones”, “Time And Time Again”) and Nirvana (“Anna Begins”), among others. August And Everything After was the Crows’ debut album and went multi-platinum, ushering in a successful run that continues to the present albeit with some personnel changes. The playlist is a nice mix of ballads and rockers:

A group that defies easy categorization or “pigeon-holing” as they move facilely between styles, Counting Crows is one of those rare bands that writes songs with lyrics that are actually worth hearing. Recording legend T-Bone Burnett produced this album and also contributes background guitar. David Immergluck, later to become a member of the Crows, adds guitar, mandolin, pedal steel, mandocello and vocals to the proceedings. Denny Fongheiser is the persuasive percussionist on the album’s hit single, “Mr. Jones.” Of interest to rock and roll trivia buffs, the title song “August And Everything After” does not actually show up on the playlist although its lyrics grace the album cover!

This is a well-balanced studio recording with voices and instruments that are nicely articulated and given a good soundstage. “Ghost Train” (Track 9) is a perfect mélange of guitars, Hammond B3, drum kit and solo voice that will have a palpable presence in your listening room.

No cover art or liner notes are included.

The final cut on this DSD64 download, “A Murder of One,” is the term for a group of crows typically reflects the thought that goes into each of these ballads, mostly about love won and lost. While I was frequently reminded of the young Van Morrison, as noted previously, this had more to do with the Crows’ blending of intelligent and intelligible lyrics with their often engaging melodies and rhythms, qualities all too rarely encountered on today’s pop scene. Although I did miss the liner notes and cover art, these are available through miracle of Google for those who wish to read them. An auspicious debut album and one that is well worth investigating.