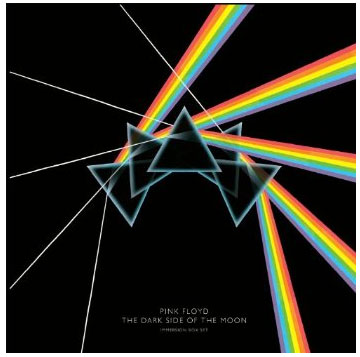 With The Dark Side of the Moon, the British progressive rock band Pink Floyd would make music history. The ten-song set would be Floyd’s first Number One album on the U.S. music charts, and it would remain in the Top 200 for a total of 741 weeks spanning 1973 to 1988. It remains one of the highest-selling (in the neighborhood of 45 million copies) and most revered albums ever released, and these accolades are not likely to be bested anytime soon, at least not by the pop pap that comprises the bulk of the musical landscape these days.

The Dark Side of the Moon is such a profound musical achievement that it defies the modern approach to listening. These days we pop in a pair of earbuds as we run out to the store, or dock the iPod while we’re making dinner. Dark Side of the Moon demands and deserves our full our full attention and rewards us with lush soundscapes that transport us to uncharted territory. Self-produced–with a little help from Abbey Road staff engineer Alan Parsons–it reflected experimentation with the latest recording and mixing ideas of the era, arguably crude by current standards but explored with great imagination and perspiration.

We shift between the poetic lyrics and instrumental jaunts, with some soulful, wordless “vocal composition” from guest artist Clare Torry for good measure, making “The Great Gig in the Sky” one of the most affecting tracks in the bunch. The songs explore themes of stress (the “dark side” of life itself?), thoughts of mortality, the upside-and-down of wealth, even the specter of madness, in the wake of the departure and mental breakdown of founding member Syd Barret.

The seminal album was revisited in a landmark multichannel Super Audio Compact Disc (SACD) release in 2003, lauded at the time for its newfound clarity as well as its ambitious expansion beyond stereo. This music harkens back to the days when we would sit in a fixed position in front of the hi-fi rig with the album cover in our lap, and perhaps a bit of herbal refreshment. This approach was a perfect fit for multichannel SACD, as it allowed the music to envelop us for a first-class headtrip.

SACD is not a “dead” format exactly, but it never caught on with the mainstream vigor of Blu-ray. And now, with Blu-ray’s unexcelled audio standard and a storage capacity that enables the inclusion of plenty of alternate versions, the various incarnations of Dark Side of the Moon can be enjoyed fully and easily by more fans than ever before. The Blu-ray is currently available exclusively in the recent The Dark Side of the Moon – Immersion Box Set.

The Blu-ray disc is the focus of our review, but as you’ll see when you reach the Supplements section, Capitol Records has outdone themselves with the depth of the musical treasures assembled here on DVD and CD. This is an indulgent package, different from but no less spectacular than last year’s award-winning Bruce Springsteen: The Promise—The Darkness on the Edge of Town Story CD and Blu-ray Set.

The three different mixes of the album can be listened to audio-only, with a black screen image (at 1080i/60 if you were wondering), or we can turn off the TV altogether. The video content of the Blu-ray is an interesting mix of vintage and more recent clips that Floyd fans are sure to like. There are two songs recorded “Live in Brighton 1972” as well as the “Concert Screen Reels” as shown during live performances during the Dark Side of the Moon Tour in England, France and North America. These reels were directed by designer Storm Thorgerson with some ambitious imagery, including uncredited animation that looks curiously like the work of Gerald Scarfe, who would serve as the animation director for The Wall.

Also preserved here is Simon Hilton’s 2003 Dark Side of the Moon Documentary about the James Guthrie-remixed 5.1-channel SACD, comprised largely of then-new interviews with the band: Roger Waters, David Gilmour, Richard Wright and Nick Mason. This brief but broad featurette takes us through the album track-by-track with discussion of the inspirations and the recording, as well as the packaging, repackaging, and revisiting. 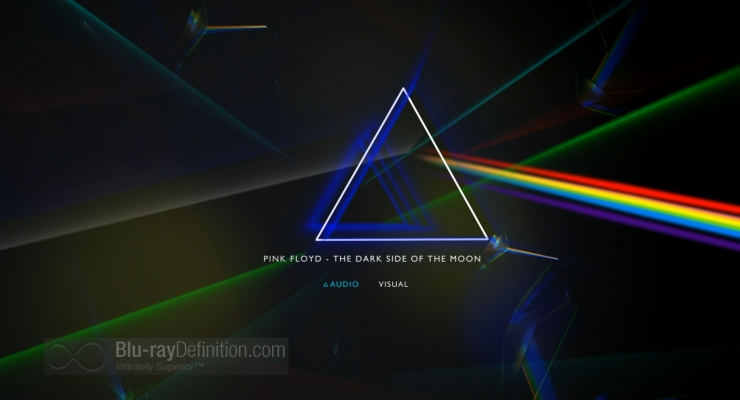 All of the video content on the Blu-ray is presented in the AVC codec, typically at a generous bitrate, at 1920x1080i/60 resolution. The “Live in Brighton 1972” section contains the songs “Careful with That Axe, Eugene” (7:44) and “Set the Controls for the Heart of the Sun” (9:13). I would guess that the performances were captured on 16mm film by a professional crew and the 4:3 image is marred by neither excessive film grain nor video noise.

“The Dark Side of the Moon 2003 Documentary” (43:26) was clearly shot on video with that slight harshness we’ve come to expect. The 16:9 image floats within a four-corner windowbox with a thick black band on all sides.

This is what it’s all about.

The Dark Side of the Moon is served up in our choice of a “5.1 Surround Mix (2003),” “Original Stereo Mix (1973)” and “4.0 Quadrophonic Mix (1974),” each in 24-bit/96-kHz Uncompressed Linear PCM. Regardless of which version we select, each note is rendered here like an individual star floating perfectly in the heavens, allowing us to detect the precise start and finish of each pluck of a string or tap of a keyboard. We can also better appreciate the seamless transitions between tracks, making the album a singular entity, and at this high-resolution we can hear the slight separation between harmonized voices. For true Pink Floyd aficionados, the experience is staggering.

The disc defaults to the 5.1-channel mix, originally created for the SACD. The obvious bits like “Money”‘s change dropping and cash registers ringing and paper ripping make bold use of the discrete soundfield, with the nimbly placed voices–some popping up unexpectedly in the rears–playing out almost like mad orators in our head. Soft footsteps run convincingly behind us, and the ticking clocks build up to an ecstatic payoff of synchronized ringing!

Next down the line is stereo, priceless in its proper preservation of the original placements of vocals and instruments but at an optimal level of clarity that once only Pink Floyd themselves could have heard, back in the day. Ah, the losses we endured on the way to the mass market….

The vintage quad mix had no LFE or center so it’s a fascinating “compromise” if you will between the two-channel original and modern surround. I found the channeling more conspicuous than the 5.1 with an interesting tendency to progress through the four speakers in a clockwise fashion at times, albeit with clean phasing. In fact, the lack of a dedicated center channel almost makes this one feel like an out-of-body experience. Man, where’s my Zig-Zags…?

An interactive System Setup menu is provided on the disc, to ensure that any and all versions will be properly reproduced.

All of the video content is accompanied by a Linear PCM 2.0 track that ably carries the respectable stereo. The Concert Screens also offer a 24-bit/48-kHz Linear PCM 5.1-channel remix. We must actively select this option, but it is a recommended enhancement.

Like I said, there are five discs of goodies, some previously released but hard-to-find, some never available to the general public, and some presented here in better quality than ever before. For example, the new digital remaster of The Dark Side of the Moon is the best that the CD has ever sounded, and it’ll play in a lot more places than the Blu-ray. Then again, be careful where you take it, since there are no jewel cases and only two cardboard sleeves for the total of six platters.

…And did somebody say “tchotchkes“?
Memorabilia:

The Dark Side of the Moon – Immersion Box Set stands as an unprecedented celebration of this most worthy subject, undeniably on the short list of the great rock albums of all time. Across various media and in breathtaking, knee-wobbling quality, this comprehensive package is destined to be a cornerstone in many a high-end audio/video library. I can hardly wait for the Wish You Were Here – Immersion Box Set, and here’s hoping that they toss the movie Blu-ray into the Immersion edition of The Wall so I can justify that one, too!