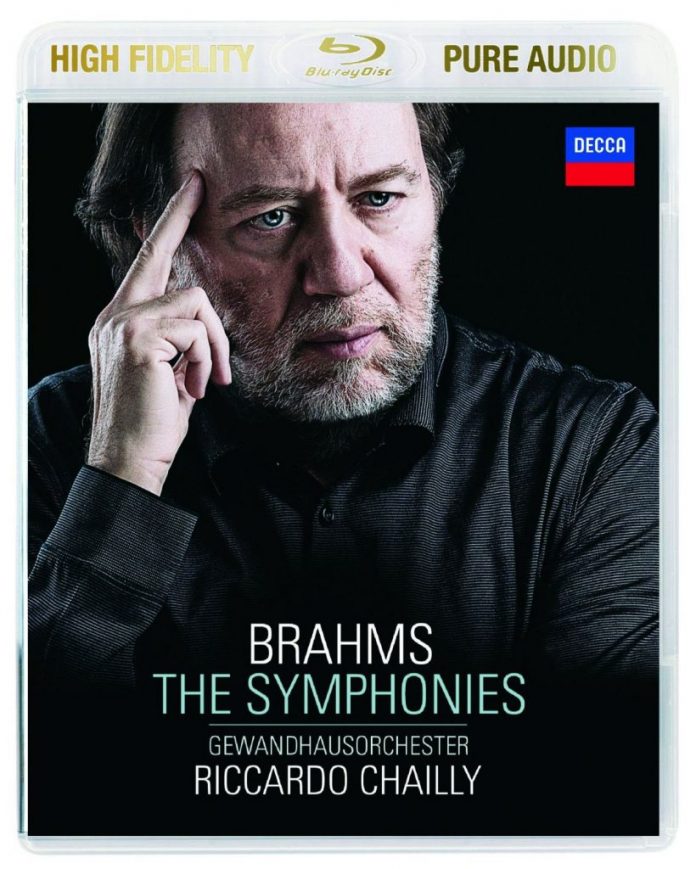 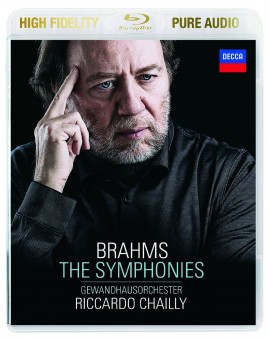 While Johannes Brahms, German by birth but Viennese by choice, wrote only four symphonies among his numerous orchestral works, all of which are included on this Pure Audio Blu-ray disc.  Brahms came to the symphonic form relatively late in his career, agonizing over his First Symphony for fourteen long years before its 1876 premiere. Symphonies 2, 3, and 4 appeared at fairly regular intervals for the next eight years and then Brahms was done with symphonies.

Symphony No. 1 actually had two different second movement Andantes (and this collection gives us the reconstructed original version for comparative purposes).  In hearing this symphony, one grows to understand the care with which Brahms prepared each measure and how much he clearly owed musically to his predecessor Ludwig van Beethoven, in the creation of the potent themes that anchor each movement and the rhythms that underpin the development sections. The finale has a theme that recalls Beethoven’s final choral Symphony No. 9, but one that possesses the unique voice of the composer.

Symphony No. 2 is the sunniest of the four with a final movement that is both uplifting and inspired giving out its own wordless musical “ode to joy,” that produces a mood that Brahms never quite recreated in his other symphonies.

Symphony No. 3 is the shortest of the symphonies and opens with a Robert Schumann-esque horn chorale. It has a simply ravishing third movement with an ultra-romantic theme that is almost balletic in its rhythms.

Symphony No. 4 serves as Brahms’s final symphonic statement and is a continuous collection of musical glories from start to finish. The first two movements, particularly the reflective Andante moderato, give no indication of the clangorous Allegro giocoso that follows. The finale seems to have Brahms saying to the audience, “I have climbed the symphonic mountain and have reached its summit.” This orchestral collection also has the revised opening bars (0:46) on a separate track.

There is much more in this generous disc as noted below:

It is somewhat ironic that Riccardo Chailly leads the Gewandhaus Orchester housed in Leipzig, as Brahms experienced little musical success in this city. That aside, Chailly shows complete mastery of the Brahms orchestral catalog, investing each work whether large or small with an unerring rightness of dynamics, pacing, and overall control.

This Pure Audio set originated as high-resolution recordings from the talented hands (and ears) of Philip Siney at the Leipzig Gewandhaus, the orchestra’s home. The overall tone is warm with a very realistic perspective, nice spread, and sounding much like one would hear in live performance. I did not hear great differences between the LPCM and Dolby TrueHD soundtracks.

The program booklet offers track listings, and background discussion of each work written by Peter Korfmacher. Performance and recording credits are also included.

At some point in his career, every major conductor of the past century has tackled all of Brahms’ symphonies although relatively few have been able to perform them equally well. This is what makes the Chailly/Gewandhausorchester set so appealing as we do not get a single symphony performance that falls short of the mark. Couple that with some familiar and not so familiar nonsymphonic selections and this Decca Pure Audio Blu-ray becomes one crazy bargain that I cannot recommend highly enough. Some of the Amazon website reviews reported playback problems with this disc. I am happy to report that my review copy played just fine.