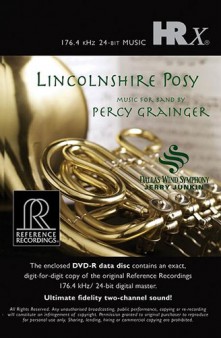 A stellar composer for wind ensembles, Percy Grainger, Australian by birth but American by adoption, began his career as a world-famous classical pianist. However, his penchant for collecting folk music led him to pursue a different musical course as a composer of popular music for bands. Linconshire Posy refers to an extended number for band that is the high water mark in Grainger’s compositional career,and the obvious centerpiece of the Reference Recordings high resolution download (176.4kHz/24 bit) available from Acoustic Sounds (www.acousticsounds.com). There are a number of additional worthy band selections that fill out this generous Grainger collection.

For those with long musical memories (yes, I belong to that list), the Mercury Living Presence issued several recordings of Grainger band music with the Eastman Rochester Wind Ensemble under the able direction of the beloved late Frederick Fennell. Jerry Junkins and his Dallas Wind Symphony pick up the baton in this release and is it ever a pip! Good as those Mercs were, this one stomps the sonic daylights out of its predecessors.

One miniature delight follows another until this program is over, way too soon in my opinion. The wind ensemble, aided by piano and chorus in some selections, is dead on perfect.

Reference Recordings has a knack for picking great recording venues and the Meyerson Symphony Center in Dallas proves to be no exception. We get the actual air from the instruments, the crispness of the percussion, and superb accounts from the other occasional participants. The soundstage is wide and deep bring Junkin’s players into your listening room. There is occasional gut-churning bass in this one so put your woofers on notice.

Original album cover is included and Carol Reynolds gives us a  brilliant mini-biography of Grainger with background vignettes for each of the selections.

Grainger’s music could never be considered to contend for the best of the serious classical music catalog nor was it intended to be such.  The composer was just as happy creating tunes that gave great pleasure to millions and was playable by professional and amateur bands. This RR release exposes some of the better known Grainger works as rendered by a terrific wind ensemble. In fact, it is not likely that you will hear this music better played anywhere any time soon. Classical purists may need to step aside on this one but it is really a great way to get your children to listen to something other than Lady Gaga, Rihanna or Katy Perry and perhaps get them interested in taking up an instrument other than a smart phone. The defense rests!