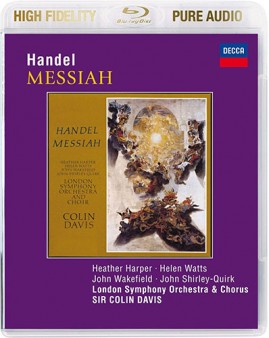 Like the way you might remember your first date, I remember the first Handel’s Messiah that I ever bought. It was a 1966 performance featuring the London Symphony Orchestra led by Sir Colin Davis and representing an amalgamation of the various versions of this choral masterpiece. As far as authenticity goes, however, there is truly no “authentic” version since Handel was constantly revising the Messiah during the final two decades of his life.

While there are scores of recorded Messiahs out there, in varying formats, I have always returned to this one with its archetypal English artists, including young soloists John Wakefield (tenor), John Shirley-Quirk (bass-baritone), Heather Harper (soprano) and Helen Watts (mezzosoprano), all of whom were in their thirties at the time of this recording. The performance is buoyed by the clear diction of the superb John Alldis-led LSO chorus and the brisk (but not overly so) tempi chosen by Maestro Davis.

Both Christmas and Easter sections are included so that everyone gets their favorite moment, the “Hallelujah” chorus.  For those who know this work well (I include myself in that number having been a chorister in a “do-it-yourself” Messiah with the Chicago Symphony Orchestra), highlights abound. My personal “magic moment” is the air, “I know that my Redeemer liveth”, a soprano solo that simply takes me to a different place. There have been bigger name artists that have recorded this solo but none brings me greater pleasure than does Heather Harper. The sense of innocence and purity that her lyric soprano conveys in a less florid than usual style simply carries the day. Of course, the other singers hold up their respective ends of the bargain as well.

There are three high-resolution formats available and the differences between them are rather narrow. I preferred the DTS-HD Master Audio recording as I felt that it had a bit more “air” than the other options.  What is stunning about this recording is the incredible resurrection of a master tape that is nearly 40 years old! I compared key sections with my original Philips LPs (never a demonstration-quality set). The High Fidelity Pure Audio disc did a better job, in all of its formats, in bringing out details and fleshing out the soundstage. Solo vocal lines were also noticeably clearer. Bass lines, never the strong suit of the original, were at least passable.

Music critic Bernard Jacobson delivers good liner notes on the background of the Messiah and there is a complete libretto (almost unnecessary with singers that have such good diction).

Handel’s Messiah has had a charmed life in the recording studio with many excellent versions from which to choose. Doubtless, some listeners will prefer newer recordings with unquestionably better sonics or other performances that feature period instruments. As an overall package, with excellent young singers, a masterful conductor, superb chorus and quite decent sonics, this Messiah continues to be my favorite choice, now made even better in its new High Fidelity Pure Audio Blu-ray release.