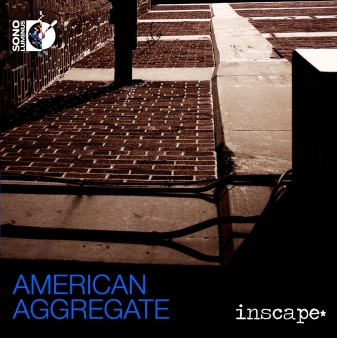 Following their initial Sono Luminus release, Sprung Rhythm, the chamber group Inscape now follows up with American Aggregate that contains a new collection of 21st century American music. In this instance, the title refers to a collection of “several (typically disparate) elements. As with most SL releases, we get a Pure Audio Blu-ray™ Surround Sound disc and Red Book CD. The seven American composers represented on this disc contribute the original works on the following playlist:

Listeners familiar with Inscape through live performances or their debut recording will understand how this ensemble of up to thirteen musicians (in this program) and led by music director Richard Scerbo uses a contemporary musical idiom to communicate our 21st century zeitgeist.

Pure Audio Blu-ray™ separates the audio from video data and definitely results in improved sound during A/B comparisons. I essayed both of the highest resolution formats (192kHz/24-bit) in DTS-HD MA 5.1 and LPCM 2.0 versions and came away mightily impressed with the results. Of course, the former provides increased ambience of the studio sonics.

The Sono Luminus program notes are consistently excellent and this booklet is no exception. It is always interesting to read about the composers and the descriptions of their works in their own words. A standard definition CD is included that will not disappoint those without Blu-ray players. Computer listeners will enjoy this program in very decent MP3 and FLAC formats .

Inscape continues to be one of the most creative and interesting chamber ensembles currently performing. The virtue of this program is that enables us to hear works that will certainly be unfamiliar and yet are musically rewarding. Fortunately, each piece receives the audio “red carpet” treatment from the Sono Luminus recording team. A very worthy successor, indeed, to Inscape’s Sprung Rhythm.