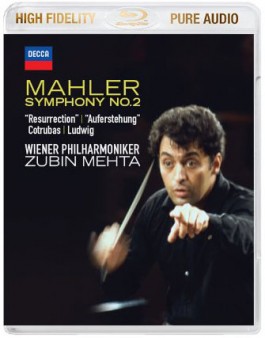 Gustav Mahler’s Symphony No. 2,  titled “Resurrection” was his first essay into the choral symphony and hugely ambitious undertaking for a 35 year-old composer who had written only one prior full-length symphony in a more traditional style. This work also broke with the time-honored symphonic form by adding a fifth movement for soloists and large chorus. The fourth movement has a poem from the Das Knaben Wunderhorn (The Youth’s Magic Horn) collection, a source that Mahler also used for a song cycle of the same name. The “Urlicht” or “Primeval Light”  solo for mezzo-soprano is an introduction to the afterlife that is incredibly moving in its own right and its relatively spare orchestration bores directly into the soul. The final movement, “Auferstehn” or “You Will Rise Again” is the obvious inspiration for this symphony’s title and, using a text by  famed 19th century German poet Friederich Klopstock (and modified by Mahler), delivers the message of release from the sorrow of death and entry into the life eternal.

Cutting to the chase, this performance by maestro Zubin Mehta, the Vienna Philharmonic Orchestra (the same orchestra that premiered the completed work), the Vienna State Opera Chorus, and two terrific soloists, soprano Ileana Cotrubas and mezzo-soprano Christa Ludwig is one of the best, if not the very best rendition of this composition that has ever been recorded, and since its original release in 1975, has been on the short list of its most recommended recordings.

A true embarrassment of riches, all three high-resolution versions are sonically outstanding with my personal vote going to the DTS-HD Master Audio option, but by a slim margin, for its greater sense of space. The orchestral colors are natural with visceral presentation of the tympani at the beginning of the third movement and the massive brass chorales in the fifth movement. But the crown jewel of the VPO is their string section that gets the appropriate warmth as would be found in the concert hall. The solo vocalists also receive near perfect miking with a real live performance perspective. For comparative purposes, I also put my treasured Decca LPs on my turntable and a Red Book CD (remastered from 96kHz/24-bit transfers of the original analog master tapes). This so-called High Fidelity Pure Audio version comes extremely close to the LPs in dynamics, warmth, and soundstage size while the CD, good as it was, sounds edgier and less spacious.

There is a multi-language program booklet that presents new liner notes by David Nice, track listings, and a libretto.

Of all of the Universal Music High Fidelity Pure Audio remastering efforts that I have heard so far, this one takes the audio sweepstakes prize for most life-like sound. It does not hurt that all of the stars aligned in this performance with obvious synergy between conductor, orchestra, and vocal forces. There have been many recorded versions of this symphony, one of Mahler’s most popular works, laid down by some of the best conductors of the modern era. I have previously reviewed excellent Blu-ray videos with conductors Claudio Abbado, Ricardo Chailly, Alan Gilbert, Mariss Jansons (two different performances!), and my overstuffed analog library has ten more versions. I can confidently assert that I have heard none better in any respect than this account from Vienna, now lovingly given the High Fidelity Pure Audio treatment. Belying its nearly four decades of age, Ray Minshull’s Decca recording team really got this one right in the fabulous Sofiensaal performance venue. If you do not already own this magnificent symphony (or even if you have another performance) this is one that you must add to your library while it is still available.