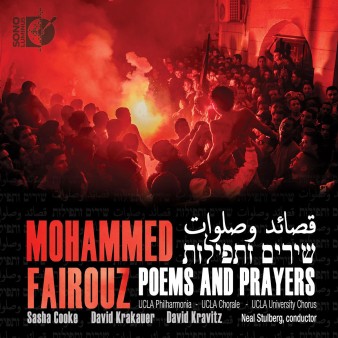 We are living in a world that has been continually beset by conflicts between peoples of different religions and ethnicities.  As this is being written, there is an unprecedented threat that is being posed by extremists to citizens of many nations.  In such times, there is truly a need for music that binds rather than separates and provides healing and solace rather than pain and anguish. This Pure Audio Blu-ray™ release of two works by 28 year-old Arab-American composer Mohammed Fairouz may be just the right music at just the right time for all concerned.

To say that this is a remarkable program, given a stellar performance by all concerned, would be the understatement of the year. It is all the more impressive that this is a profound musical statement made by a composer only in his mid-20’s at the time that he breathed life into works about death, despair, suffering, yet also about peace and resolution.

The works on this disc absolutely demand sound reproduction of the highest quality.  I am happy to report that they are well served by the high resolution versions in DTS-HD Master Audio 5.1 and LPCM 2.0 Stereo formats (I do not have a 7.1 set up so the third option was not evaluated). The sense of place, in this case, UCLA’s Royce Hall, is displayed in all of its sonic glory. [Note that display shows the surround versions erroneously to be in 5.0 and 7.0 formats].

There are extremely thorough background notes on Fairouz and his works by Tamara Levitz. The booklet also provides cast, credits and lyrics, as well brief profiles of the artists involved. Additional musical bonuses include a standard Redbook CD, and MP3 and FLAC files.

It is not often that a new work by a young (but quite accomplished) composer covers the gamut of human emotions as thoroughly as does this one. Poems and Prayers is not only a symphony for our troubled times but one that is truly timeless, capable of reaching audiences of all religious persuasions.  If there was ever a new Pure Audio Blu-ray™ release that demands to be heard, this is it.