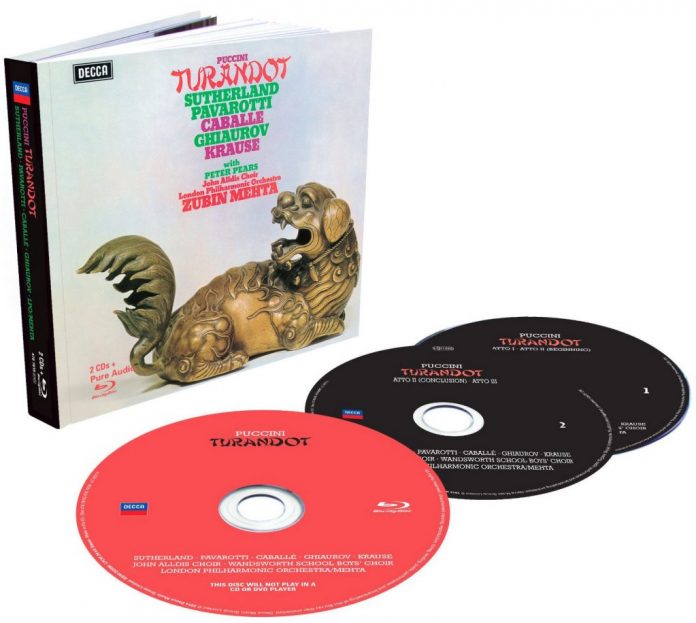 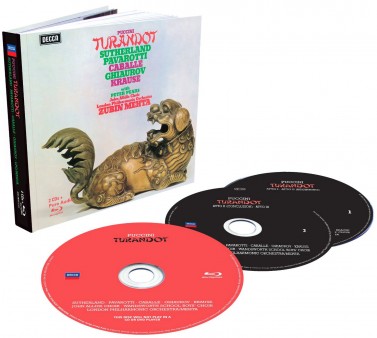 The last of Giacomo Puccini’s operas, Turandot was left unfinished at the time of his death in 1924. This Italian composer’s fascination with the Orient was evident from his earlier opera, Madama Butterfly, set in Japan. Turandot goes back to ancient Imperial China and is based on the legend of a virginal princess whose many suitors meet their death when they cannot answer her three riddles.

This 1972 Decca recording features legendary tenor Luciano Pavarotti as the eager Prince Calaf who delivers the iconic aria “Nessun dorma” (No one sleeps) as well as we are likely to hear in our lifetimes. The dream cast partners Pavarotti with soprano Dame Joan Sutherland as Turandot, soprano Montserrat Caballe as the servant girl Liu, bass Nicolai Ghiaurov as Timur, Calaf’s father, and, in a character role, British tenor Peter Pears as the aged Emperor Altoum.

Many centuries ago, in response to the rape of one of her ancestors, the chaste Princess Turandot challenges regal suitors to win her hand only to have them fail and get beheaded. Young Prince Calaf arrives and reunites with his blind father, Timur, accompanied by Liu. Calaf is love-struck at his first vision of the Princess and bangs the ceremonial gong to signal his intention to answer the riddles, knowing that failure means his death. After Calaf and Turandot have their first face-to-face encounter, he solves her three riddles but she refuses to yield.  Calaf offers to give up his head if Turandot can discover his name before daybreak. Turandot turns her forces loose to find the answer and when they capture Liu and Timur, it looks like the Princess will have her way. However, Liu kills her herself to avoid revealing Calaf’s true identity. In the end, the Prince melts the heart of the “Ice Princess” and all ends well in China.

This recording is the standard for all versions of this opera and the current reissue lets us know why. The audio elements are all in place, and the singers could not be bettered. At first, I thought that Dame Joan was an unusual choice for the title role but having heard this recording many times, her casting was a stroke of sheer genius. This role requires Wagnerian vocal power and Sutherland has this power in abundance. There is literally not a weak link in the vocal chain and maestro Mehta, having made a specialty out of Turandot, leads the London Philharmonic Orchestra to magisterial heights.

This Pure Audio disc offers a choice of 2-channel audio formats, LPCM or Dolby TrueHD, with the latter being a bit more spacious. Philip Siney’s engineering team went back to the multi-track master tapes that Kenneth Wilkinson and crew recorded in London’s Kingsway hall and remastered them at 96kHz/24-bit resolution. As good as the Red Book CDs are — and they are mighty good — this Pure Audio version is a true sonic revelation.

If you could only get one Turandot, this is it. Iconic singers, fabulous musical direction, and sound reproduction from the gods, need I say more? Another big winner in the Decca series of remastered Pavarotti operas that leave us wanting many more of them in the future.