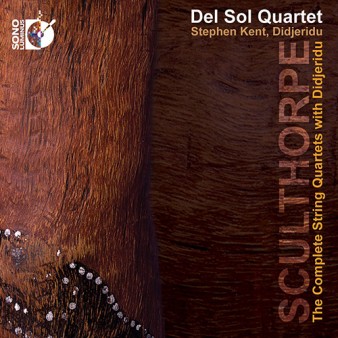 The late Peter Sculthorpe has been acknowledged as one of Australia’s most important and accomplished composers. The Sculthorpe catalog encompasses nearly all musical forms from solo piano through chamber ensemble, opera, choral, orchestral and film scores. Of the eighteen string quartets that he composed, four added the didjeridu, an aboriginal wind instrument with a distinctive sound that is unforgettable. The playlist follows:

The Del Sol Quartet consists of violinists Kate Stenberg and Rick Shinozaki, violist Charlton Lee, and cellist Kathryn Bates. Based in San Francisco, these artists have performed together for 22 years and have garnered copious accolades including the top Chamber Music America ASCAP Award for Adventurous Programming. Thus, the Sculthorpe quartets would seem to be right up their musical alley. Didjeridu soloist Stephen Kent was trained as a French horn player and took this background to create his own technique for an instrument that would seem to be as far from his native England as one might imagine. Kent has a sizable discography featuring the didjeridu.

The high-resolution 5.1 and 2.0 channel versions of this Pure Audio Blu-ray™ (recorded in DTS-HD Master Audio 7.1, 192kHz/24-bit) were auditioned during this review (my system lacks 7.1 capability). There is a natural sounding depth and width that gives the listener a very good (if somewhat close) seat in the recording hall. The warmth of the instruments is well reproduced in all versions.

For listeners who may be unfamiliar with Peter Sculthorpe, the program booklet provides a musical biography interwoven with the descriptions of each quartet. Background on the performers and recording credits are also included. Two Red Book CDs are also included as well as the mShuttle downloads of MP3 and FLAC files.

Much of this music is introspective and tends toward melancholia, but this is the nature of much of the subject matter of these pieces, stemming from some of the sad history of this “down under” land. That being the case, I would recommend listening in more than one session so as not to miss the inherent beauty in Sculthorpe’s musical line and richness of expression. The didjeridu adds a unique voice to the string ensemble and will make quite an impression on listeners coming to this instrument for the first time. Sono Luminus provides a fine valediction to a brilliant and original composer who left us on August 8, 2014.