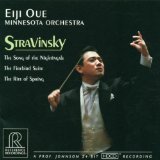 Eiji Oue, former music director of the now-troubled Minnesota Orchestra, led this group to some of its highest performance moments during his tenure from 1995-2002.  The recognition of this venerable musical organization (think of conductors like Antal Dorati, Eugene Ormandy, and Edo de Waart, among others) was substantially aided by its recording contract with Reference Recordings.  Stravinsky was one of the two initial CD releases under this contract, debuting in 1996.

These pieces by Igor Stravinsky are some of the 20th century orchestral staples and for good reason. The program consists of a ballet suite, an operatic suite, and complete ballet (see playlist below). All works have numerous percussive and propulsive sections interwoven with infectious melodies and feature terrific showpieces for the soloists in the orchestra.

Reference Recordings has already issued HDCD  (Grammy nominee in 1997 for best engineering) and HRx DVD-R versions of this disc. The playlist follows:

Stravinsky is a new release in the ongoing “Super Hi-Rez” 176.4kHz/24-bit download series, available online through Acoustic Sounds (www.acousticsounds.com).. By way of spoiler alert, this one absolutely knocks it out of the sonic and musical park!

I have heard/owned several of the Oue/Minnesota Orchestra series and while each has its sound and performance merits, Stravinsky must rise to the top of the list.  WARNING: the opening  sound levels are quite low so do not crank up your system’s gain to avoid woofer damage when the humongous bass drum thwacks occur later.

The hi-res download gets all of the performance dynamics, small details, and spacious soundstage across with perfection.  The recording places you in a prime orchestra seat while you get the sound tsunami that the composer intended for these powerful works. In comparison, the HDCD, while excellent in its own right, is no match for the sonics of this download.

Original liner notes by Mary Ann Feldman provide very thorough information on each composition, particularly useful for The Song of the Nightingale that is the least familiar of the three. Brief backgrounds on maestro Oue and his orchestra complete the booklet. Original cover art is also supplied.

It just keeps getting better and better with these RR hi-res downloads. Although they are not being reviewed in the order of their original recording dates, the unifying factor is the top-of-the-heap recording engineering by Keith Johnson. I can think of few other studio engineer groups (and that would be going back to the legendary days of  RCA’s Living Stereo, Mercury’s Living Presence or Decca’s FFSS) who treated the artists with such respect and high fidelity. Stravinsky is yet another outstanding example of this collaboration and will command listeners’ attention from start to finish. Bravo!