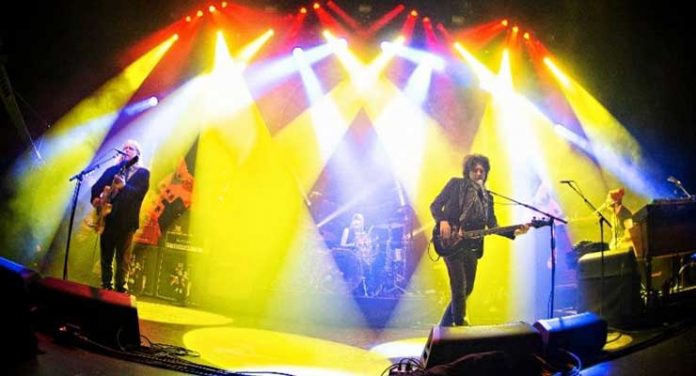 Gov’t Mule is one of the few jam bands on the scene with an actual connection to the acts that influence them. Formed in 1994 as side project of The Allman Brothers Band by guitarist Warren Haynes and bassist Allen Wood, their first album was released in 1995 and they are still going strong even in the absence of The Allman Brothers and in the wake of the death of Greg Allman. Twenty-five-years on, Mule, as their diehard fans refer to them, have released Bring On The Music – Live at The Capitol Theatre, a 2 CD-set, 2 separate double-vinyl packages, and digital (featuring audio from the film) released June 28th with the film available as part of a 2 CD/2 DVD deluxe package (featuring exclusive audio not in the film) and on Blu-ray July 19th via Provogue / Mascot Label Group.

The concert film directed by renowned music photographer and director Danny Clinch (Pearl Jam, Bruce Springsteen, Foo Fighters, Phish) in a 9-camera shoot, was captured during two special nights at The Capitol Theatre in Port Chester, NY, on April 27th and 28th, 2018 is a straightforward set with colorful lighting and a simple backdrop. While it doesn’t have the psychedelic projections typical of The Allman Brothers Band shows, it reminded me very much of the Allmans’ set I saw back in the ‘90s. It sticks out in my head because I had backstage passes but never got back there as Greg took ill after the show.

Gov’t Mule: Bring on the Music is rollicking – well performed and without a dull moment. There are a few interspersed behind-the-scenes with interviews with the bandmembers, but mostly this about the music and the kind of old school rock music that fans of jam bands and alt country will love. There’s nothing processed, electronic or autotuned here. There are skilled guitar solos, real drums, and soulful vocals. Mule don’t waste any time, either. The opening track ““Traveling Tune (Part 1)” gets things started with a country flare, the soulful “The Man That I Want to Be” is reminiscent of a slow Wilco track, and the centerpiece is the hard rocking ““Mule”. They also do an mashup of “Funny Little Tragedy” and The Police’s “Message in a Bottle”.

The 2-CD set offers up more great live rock music from Gov’t Mule, but a different collection of songs with some of them different performances of the same numbers.  On this we get the almost heavy “Lola Leave Your Light On,” but first the lead off track, the hard-hitting, bluesy “Hammer & Nails” kicks of the set. The mix is similar to the stereo mix for the film – it sounds lively, ambient, punchy.

Gov’t Mule: Bring on the Music is out on Blu-ray, DVD, and 2-CD collection from Provogue