The Smurfs 2 on Blu-ray, Blu-ray 3D in December

Sony Pictures Home Entertainment has officially announced the forthcoming release of the animated family film The Smurfs 2 on Blu-ray+DVD and Blu-ray 3D+Blu-ray+DVD combo packs for December 3, 2013. Each set will also come with Digital HD Ultraviolet. Both Blu-ray and Blu-ray 3D combo packs will include the Blu-ray exclusive Smurfs Mini-Movie “The Legend of Smurfy Hollow” and three other Blu-ray exclusives.  The Blu-ray 3D Combo Pack will sell at a SRP of $55.99 and the Blu-ray Combo Pack for $40.99. See below for further details.

“A cute film both kids and parents can enjoy.”
– Francine Brokaw, FamilyChoiceAwards.com 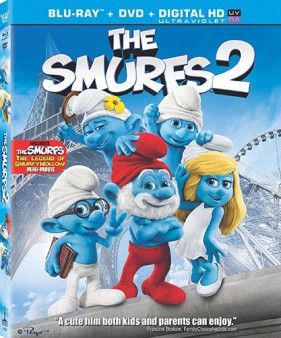 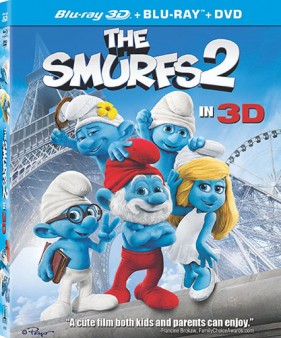 Only included on the 3D and Blu-ray combo packs is Sony Pictures Animations’ animated Smurfs mini-movie, “The Legend of Smurfy Hollow.” In this mini-movie inspired by the classic tale “The Legend of Sleepy Hollow,” the Smurfs learn the traditional values of friendship and family.  The 3D and Blu-ray combo packs also come with three all-new, kid-friendly featurettes, including “The Puurrfect Companion: Azreal’s Tail,” showing how Gargamel’s sidekick was created, from the live-action cat to the digital double, and how actor Frank Welker brought the character to life.  Both the Blu-ray combo packs and DVD come with deleted scenes and two additional featurettes.  “Animating Azrael” gives an in-depth look at how filmmakers animated Gargamel’s sidekick, and the all-new “Daddy’s Little Girl: The Journey of Smurfette” traces the origins of the one-and-only Smurfette back to Smurf creator, Peyo, and features Katy Perry on how she tapped into her inner Smurf to voice the classic character.

Synopsis:
Evil wizard Gargamel (Hank Azaria) creates Hackus and Vexy, a pair of mischievous Smurf‑like creatures, hoping they will let him harness the magical Smurf‑essence. However, he soon discovers that he needs the help of Smurfette, who knows the secret to turning the pair into real Smurfs. When Gargamel, Hackus and Vexy kidnap Smurfette from Smurf Village and bring her to Paris, it’s up to Papa, Clumsy, Grouchy and Vanity to reunite with their human friends, Patrick (Neil Patrick Harris) and Grace Winslow (Jayma Mays), to rescue her.

THE SMURFS 2 has a running time of 105 minutes and is rated PG for some rude humor and action.