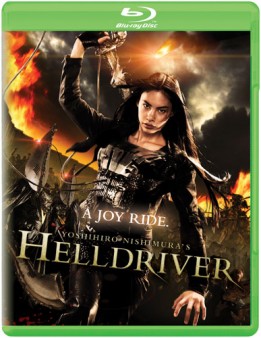 Nishimura’s  (Tokyo Gore Police; Vampire Girl Vs. Frankenstein Girl) wild horror visions home on Blu-ray (and DVD) for UK consumers when they release Helldriver on 31 October 2011 at an RRP of £20.42 (Blu-ray) and £18.37 (DVD) respectively.

The Blu-ray will feature a 1080p high definition 1.78:1 transfer, and include both theatrical and director’s cuts of the film. Other special features include a “making of” featurette and trailer.

The absolutely insane Yoshihiro Nishimura, director of Tokyo Gore Police and the amazing Vampire Girl Vs. Frankenstein Girl, is back with another foray into disturbing wonder with the Japanese zombie movie Helldriver.

An alien-spawned, mysterious mist blankets the northern half of Japan, transforming those who inhale it into ravenous, flesh-eating zombies.

Plunged into chaos, Japan is torn in two: the southern half of the country, where the populace remains untouched by the deadly gas, lives behind a heavily-fortified wall, while the northern half is a lawless, zombie-infected wasteland.

Hope arrives in the form of Kika (Yumiko Hara), a beautiful high school girl armed with a chainsaw sword powered by an artificial heart. Recruited by the government, Kika leads a ragtag group of desperados on a secret mission into the zombie-infected wilds to exterminate zombie queen Rikka (Eihi Shiina from Audition, Tokyo Gore Police) and put an end to the plague of the living dead. But the road is fraught with a thriving zombie population that refuses to lay down and die!