Warner is launching a huge autumn campaign in celebration of the 75th anniversary of the classic fantasy film The Wizard of Oz. In addition to bringing a digitally remastered, IMAX 3D version of the film to theatres for a limited, one-week run on September 30, 2013, the studio will be releasing a new 75th Anniversary Collector’s Edition on October 1, 2013, which will include Blu-ray, Blu-ray 3D, DVD, and UltraViolet.  The set will include an all-new documentary, The Making of The Wonderful Wizard of Oz; bonus features and  what Warner lists as “premium collectibles”, and includes: a collectible 75th Anniversary journal; Sparkle RUBY SLIPPERS™ Globe; Noble Collection 3-piece enamel pin set, a Map of Oz and a 48-page hardcover book. The collection is limited and numbered and will sell for a SRP of $105.43. There will also be three more editions available separately: a two-disc 3D/Blu-ray ($35.99 SRP), a one-disc Blu-ray ($19.98 SRP) and a two-disc DVD ($16.95 SRP). All four will contain the new documentary and extra content. 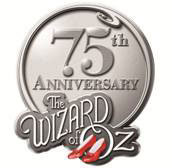 THE WIZARD OF OZ
IN 3D & IMAX® FOR THE FIRST TIME EVER!
WARNER BROS. TO CELEBRATE THE FILM’S 75THANNIVERSARY WITH HUGE FALL 2013 INITIATIVE
Film Returns to the Big Screen for Exclusive IMAX® 3D One-Week
Run on September 20

Burbank, Calif. June 4, 2013 – Marking the 75th anniversary of The Wizard of Oz, Warner Bros. has produced a 3D remastered version of the film which will launch a comprehensive, cross-divisional campaign encompassing theatrical, home entertainment, consumer products and a number of promotional partnerships.

Kicking off the celebration, The Wizard of Oz 3D will be presented in the immersive IMAX® 3D format and return to the big screen for an exclusive one-week engagement in IMAX® theatres across North America beginning September 20, 2013.

“We couldn’t be happier to partner with IMAX® as we celebrate the 75th anniversary of this iconic film,” said Dan Fellman, President, Domestic Distribution, Warner Bros. Pictures. “The Wizard of Oz IMAX® 3D Experience is an integral part of our studio-wide anniversary initiative and we are excited to give fans the rare opportunity to see this stunning version on the big screen.”

“The Wizard of Oz is one of the most beloved films of all time and we are thrilled that our longtime partners at Warner Bros. have made IMAX® a part of this exciting milestone event,” said Greg Foster, Chairman and President of IMAX® Entertainment. “This film revolutionized the use of color and special effects in cinema, and we’re excited to add another ‘first’ – bringing this timeless classic to moviegoers through the power of The IMAX 3D Experience® for the very first time.”

The IMAX® release The Wizard of Oz will be digitally re-mastered into the image and sound quality of The IMAX 3D Experience® with proprietary IMAX DMR® (Digital Re-mastering) technology. The crystal-clear images, coupled with IMAX®’s customized theatre geometry and powerful digital audio, create a unique environment that will make audiences feel as if they are in the movie.

Following the IMAX® theatrical release, Warner Bros. Home Entertainment (WBHE) will release a limited and numbered The Wizard of Oz 75th Anniversary Collector’s Edition on October 1, 2013, featuring the 3D version of the film and more.

“Seventy-five years later, The Wizard of Oz continues its reign as a multi-generational favorite, with nearly 100 percent awareness among adults and more than 80 percent awareness among children,” said Jeff Baker, WBHE Executive Vice President and General Manager, Theatrical Catalog. “In this new 3D version, the film is bound to make history all over again—with both past and future fans.”

The Wizard of Oz 75th Anniversary Collector’s Edition will debut as a five-disc set that will include Blu-ray, Blu-ray 3D, DVD and UltraViolet versions of the film; a new documentary, The Making of The Wonderful Wizard of Oz; bonus features and premium collectibles ($105.43 SRP). Three more editions will be available separately: a two-disc 3D/Blu-ray ($35.99 SRP), a one-disc Blu-ray ($19.98 SRP) and a two-disc DVD ($16.95 SRP). All four will contain the new documentary and extra content.

SPECIAL FEATURES will include all previously released special features along with:

The 3D conversion was a long and complex project which Warner Bros. initiated with a very high resolution (8k) scanning of the original Technicolor camera negative. The restored 2D image was then transformed by creating a depth-map of each frame to construct 3D imagery and determine distances from the viewer’s vantage point. This was followed by the long process (with the use of a rotoscope) to further refine viewer distances and fully layer shapes and objects.

“People have asked for years about The Wizard of Oz 3D conversion. My answer was always, ‘We’re not doing it until it’s perfect.’ And now it is,” said Ned Price, Warner Technical Operations’ Vice President of Mastering. “As a kid, I was so enthralled by this film. Watching it, you just want to enter the frame, enter the Land of Oz. This new version will allow you to do just that.”

In support of the 75th anniversary of the film, Warner Bros. Consumer Products’ extensive licensing program of more than 80 top-tier licensees will expand with new partnerships. Leading the way is master toy partner Jazwares, along with Mattel, Rubies, Lionel, Steiff, USAopoly, Thomas Kinkade, and many more that will be taking part in the celebration. Special commemorative anniversary product will be available across a wide array of categories including apparel, jewelry, collectibles, publishing, stationery and paper goods, toys and games, slot machines and personal care.
In addition, the Warner Bros. releases will be massively supported by a far-reaching promotional campaign encompassing numerous participants. National corporate partners include (to date) promotional activities with a Major National Quick Serve Restaurant (QSR), the debut of a giant hot-air balloon and balloonhead characters in the 87th Annual Macy’s Thanksgiving Day Parade®, as well as joint programs with Amtrak, Gourmet Trading Company, Langers Juice, QVC and Simon Malls®. In collaboration with the Ad Council and the National Highway Traffic Safety Administration, new child passenger safety Public Service Announcements (PSAs) featuring iconic elements from The Wizard of Oz film will be distributed and run in donated media nationally.

The Wizard of Oz themed competition will also be featured on an upcoming episode of Food Network’s “Cupcake Wars” to be aired later this year.

About the Movie
Adapted from L. Frank Baum’s timeless children’s tale about a Kansas girl’s journey over the rainbow, The Wizard of Oz opened at Grauman’s Chinese Theater on August 15, 1939. The film was directed by Victor Fleming (who that same year directed Gone With the Wind), produced by Mervyn LeRoy, and scored by Herbert Stothart, with music and lyrics by Harold Arlen and E.Y. Harburg. DOROTHY™ was portrayed by a 4’11” sixteen-year-old girl who quickly earned her reputation as “the world’s greatest entertainer”—the incomparable Judy Garland. Ray Bolger appeared as the SCARECROW™; Bert Lahr as the COWARDLY LION™, Jack Haley as the TIN MAN™. Frank Morgan was seen in six different roles, including that of the wonderful “Wizard of Oz” himself.

The Wizard of Oz received five Academy Award® nominations[i], including Best Picture (Outstanding Production), and captured two Oscars®—Best Song (“Over the Rainbow”) and Best Original Score — plus a special award for Outstanding Juvenile Performance by Judy Garland. The film was an overwhelmingly popular and critical success upon its initial release and repeated its ability to captivate audiences when M-G-M reissued the film in 1949 and 1955. The film made a new kind of history with its network television premiere in 1956 on CBS. Nearly 45 million people tuned in for this initial telecast, marking the beginning of an annual tradition. Ever since, The Wizard of Oz has been shown virtually annually on network (and then cable) television; its magical story and heartfelt performances have enabled it to grow from a perennial classic to its current status as a treasured icon of popular culture.

THE WIZARD OF OZ and all related characters and elements are trademarks of and © Turner Entertainment Co.
(s13).

“Academy Award®,” “Academy Awards®” is the registered trademark and service mark of the Academy of Motion Picture Arts and Sciences.

Blu-ray Disc™ and Blu-ray™ and the logos are the trademarks of Blu-ray Disc Association.

Note: All enhanced content listed above is subject to change.

About Warner Bros. Home Entertainment, Inc.
Warner Bros. Home Entertainment (WBHE) brings together Warner Bros. Entertainment’s home video, digital distribution, interactive entertainment, technical operations and anti-piracy businesses in order to maximize current and next-generation distribution scenarios. An industry leader since its inception, WBHE oversees the global distribution of content through packaged goods (Blu-ray Disc™ and DVD) and digital media in the form of electronic sell-through and video-on-demand via cable, satellite, online and mobile channels, and is a significant developer and publisher for console and online video game titles worldwide. WBHE distributes its product through third party retail partners and licensees, as well as directly to consumers through WBShop.com.

About IMAX® Corporation
IMAX, an innovator in entertainment technology, combines proprietary software, architecture and equipment to create experiences that take you beyond the edge of your seat to a world you’ve never imagined. Top filmmakers and studios are utilizing IMAX theatres to connect with audiences in extraordinary ways, and, as such, IMAX’s network is among the most important and successful theatrical distribution platforms for major event films around the globe.

IMAX is headquartered in New York, Toronto and Los Angeles, with offices in London, Tokyo, Shanghai and Beijing.  As of March 31, 2013, there were 738 IMAX theatres (606 commercial multiplexes, 19 commercial destinations and 113 institutions) in 53 countries.

IMAX®, IMAX® 3D, IMAX DMR®, Experience It In IMAX®, An IMAX 3D Experience®, The IMAX Experience® and IMAX Is Believing® are trademarks of IMAX Corporation. More information about the Company can be found at www.imax.com. You may also connect with IMAX on Facebook (www.facebook.com/imax), Twitter (www.twitter.com/imax) and YouTube (www.youtube.com/imaxmovies).