Agent Broughton begins a description of the events that took place after she had been sent to Berlin to recover Gascoigne’s secret list and to eliminate a double agent known only to MI6 as “Satchel” who has been selling classified secrets to the Russians. She has been ordered to contact local MI6 operative David Percival (James McAvoy) but it becomes obvious from the start that her identity has been compromised. Percival is a  suspicious character with shady connections and has secretly bugged Lorraine’s luxury hotel room. After surviving brutal hand-to-hand combat with local KGB thugs, agent Broughton meets French spy Delphine Lasalle (Sofia Boutella) in a bar and, in short order, they begin to heat things up in Lasalle’s apartment. Later, Broughton discovers that the French woman is not the neophyte agent that she first claimed to be.

While the spy “list” is still missing, Broughton, aided by The Watchmaker (Til Schweiger), local operative Merkel (Bill Skarsgard) and Percival, has located a Stasi defector “Spyglass” (Eddie Marsan) who claims to have memorized the list’s entire contents. Turning “Spyglass” and his family over to the West turns out to be much more challenging than anticipated. Broughton must overcome a seemingly endless stream of KGB agents bent on eliminating her, “Spyglass,” and anyone else in the way of delivering the goods to Alexsander Bremovych (Roland Moller), a Russian oligarch who will sell the “list” to the highest bidder. 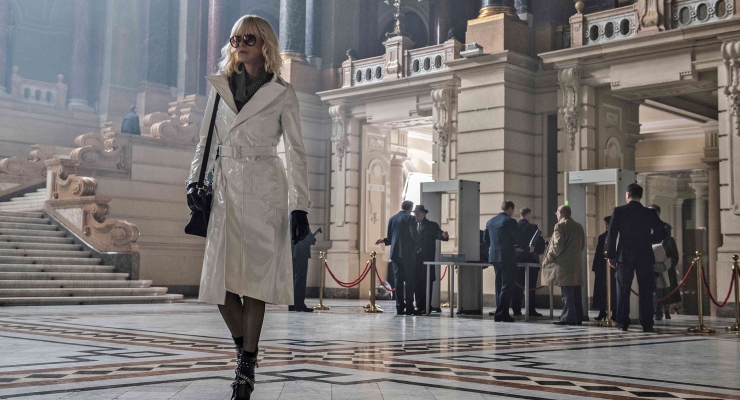 In the time-honored tradition of spy-vs-spy-vs-spy, Atomic Blonde is an action-driven neo-noir thriller with enough cinematic violence to rival Theron’s earlier Mad Max: Fury Road. It is truly astonishing that, after each combat sequence, characters that have been shot, stabbed, groin-kicked, head-butted or bludgeoned managed to get up off the canvas and fight another round. Those expecting a James Bond redux will get instead a  super-strong female lead that might hold the record for most beat-downs in a two-hour film. Atomic Blonde scores points for its scintillating action cinematography and a ‘80s playlist surround track to die for. I am afraid that sums up the good news. Kurt Johnstad’s script is derivative and squanders the considerable talents of a truly top-notch cast. Former stuntman David Leitch makes his directorial debut but serves up a uni-dimensional adaptation of a “graphic novel” that might have been better realized as a feature-length anime. With its assortment of predictable plot twists and last-minute explications tying up all the loose ends, an Atomic Blonde sequel would seem superfluous. Fans of Charlize Theron will lap up her numerous eye-candy scenes, both in and out of her wardrobe. For me, Atomic Blonde, is a disappointing repetitive exercise in excessive violence that becomes mind- and eye-numbing over its two-hour run time.