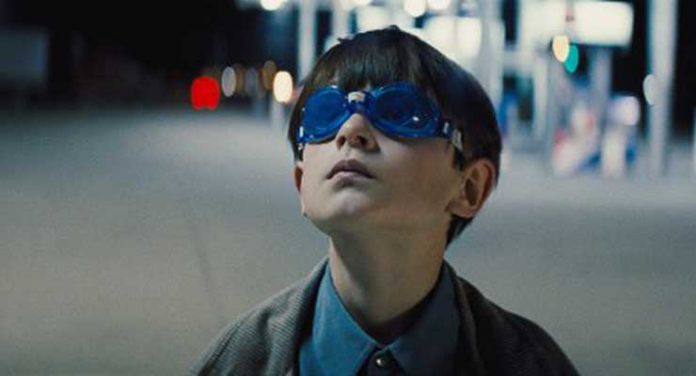 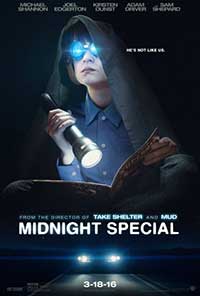 With one of the more catchy, or confusing film titles this year, Midnight Special is writer-director Jeff Nichols’ latest film starring Michael Shannon (Take Shelter). Roy (Michael Shannon) and his son Alton (Jaeden Lieberher) are on the run from law enforcement, because Roy has “kidnapped” Alton. Along for the ride is Roy’s brother, Alton’s uncle, Lucas (Joe Edgerton).

Alton is a bit of a hot commodity, because he is special. Roy and Lucas know this and so does his congregation and so does the government. Alton has special powers. What kind of powers and their extent is unknown but those around him including his father and uncle know that they are big and powerful. Alton seems to be able to tap into communication devices used by law enforcement and the government. He can also tap into radio signals and talk in many foreign languages at will. As far as his “powers” go – he seems to have blue energy beams emit from his eyes.

and date. According to them that is the day of “judgment.” The local authorities, congregation, and government are not going to let that stand in their way, as they deploy to try and stop Roy and take Alton into custody.

Months later – I’m still wondering what the title of “Midnight Special” means. Actually, it doesn’t mean anything in terms of context. The film is a family road movie with action elements, theology, and science fiction. I am a fan of Jeff Nichols and Michael Shannon, but if you’re expecting an emotionally intense performance from Shannon like Take Shelter then you will be disappointed. He’s the polar opposite in Midnight Special. All he wants to do is to get his boy to where he needs to be and protect him at all costs. Roy carries on like a battle weary warrior. He’s running on fumes and all he wants to do is make sure that Alton is okay. That’s why I say he is less intense here than he was in Take Shelter. When we finally do get our pay off in the last part of the 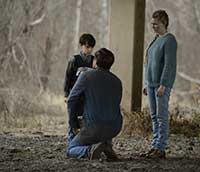 film – I did not see it coming but it was actually pretty neat. It was reminiscent of what Alex Proyas did with his film Knowing. It’s as if both of these movies can exist within that universe due to their unique take on the material.

Midnight Special is a breath of fresh air in a crowded marketplace filled with epic-blockbuster-franchise-hits. The film features a great primary and supporting cast, good story, and nice special effects (the film cost only 18 million to make) and plays like a nice throwback to films of yesteryear – there’s a nice layer of nostalgia to Midnight Special that I appreciated.

The film is currently playing in extremely limited markets, but is set to expand a bit next week. If you are in Los Angeles it is playing at the ArcLight Cinemas in Hollywood and at The Landmark Theaters in West Los Angeles. It’s also playing in a select few in New York. If you can make it out these select markets then it would be worth your time to do so otherwise you’ll be waiting for a bit until the next couple of weeks see a gradual expansion.