In the latest Netflix Original Film What Happened to Monday, the future world of 2073 has seen a spike in population and decline in food supply for the estimated 10 billion people living on our planet. With a theme recalling the sci-fi classic Soylent Green and its many successors, overpopulation films are often disturbing watches. With each passing decade, the specter of a scenario in which people surpass the Earth’s ability to provide for them may be closer to becoming a reality.

What Happened to Monday finds old Terrence Settmann (Willem Dafoe) inheriting septuplets from his estranged, dead daughter. Multiple gestations have become more common supposedly due to the use of genetically modified high yield food crops but society now limits each family to one child. Surplus children are taken away and put into “cryosleep” by the Child Allocation Bureau (CAB), only to be awakened if and when the food situation improves. Settmann names his children after the days of the week, Monday through Sunday (all played by Noomi Rapace) and because they are identical, each can pass for “Karen Settmann” outside of their covert apartment.

As adults, the “Karens” must all work at the same job in the same office, wear identically tampered identity bracelets, clothes and make up as failure to pass for each other would result in their being put in cryo-preservation. Tension grows among the siblings who might share the same appearance but have different temperaments, personalities and skill sets. To add to the complexities of their daily lives, they must update each other on the day’s preceding events. Everything changes when Monday disappears. Tuesday leaves to discover her whereabouts and is picked up by the CAB where she meets Director Nicolette Cayman (Glenn Close). A patrol is sent to the Settmann apartment with orders to assassinate the remaining sisters. The men are clearly unprepared for what they encounter and an epic battle follows that takes the film on a very gruesome downward spiral. What Happened to Monday has its share of twists and turns, as “Karen” and her “boyfriend,” Adrian Knowles (Marwan Kensari) attempt to expose Director Cayman’s terrible secrets. 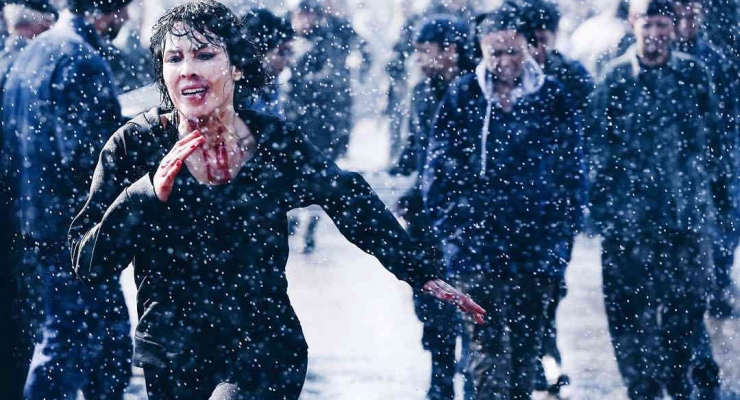 Current audiences must be inured to the graphic violence that permeates the dystopian films that seem to hit our screens every month, and this one is no exception. While many series like The Hunger Games and Insurgent feature young protagonists struggling against overbearing governments, this film has Noomi Rapace, through the video trickery rendered by today’s special effects teams, creating seven more mature and very powerful women with distinctive personalities and appearances. There are not many actors who could pull off these transformations so perfectly (imagine seven actually interesting Atomic Blondes) and that is what keeps the heart of this sci-fi thriller beating. Unfortunately, Max Botkin and Kerry Williamson deliver director Wirkola and the cast a wandering script that squanders some of its best dramatic potential.

The seamless efforts taken by seven siblings at being one being is not used to best effect nor does the theme of overpopulation get much more than lip service, as the second half of the film becomes a contest between endless streams of government police against a seemingly over-matched small group of independent women. Viewers seeking two hours of diversion will be well nourished while others seeking more substantial fare will leave their home theaters still a bit hungry.

What Happened to Monday is available for streaming on Netflix.