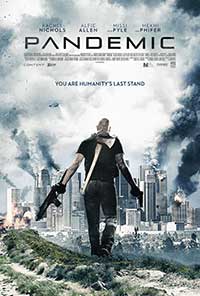 The movie-going public’s awareness of post-apocalyptic infectious disease films has gone “viral” thanks to recent outbreaks of Ebola and Zika. Director John Suits (The Scribbler, Breathing Room) collaborates with first-time film writer Dustin T. Benson on a visit to the near future, 2017 to be precise, when our planet’s population has been decimated by a highly contagious, lethal, and incurable viral pandemic.

Dr. Lauren Chase (Rachel Nichols), a young infectious disease laboratory specialist, has moved from a devastated New York back to Los Angeles and, under the orders of Dr. Greer (Paul Guilfoyle) is charged with extracting LA’s uninfected citizens. After a grim tour through the infected patient ward, Lauren partners with tactics officer Gunner (Mekhi Phifer), ex-con driver Wheeler (Alfie Allen) and navigator Denise (Missi Pyle) to pick up essential food supplies. Going through a seemingly endless tunnel, the group is set upon by legions of the infected and we are treated to several minutes of shooting, skull bashing, and hatchet hacking in order to subdue the hopeless victims of the pandemic who stand in the way of their assignment.

The group comes across Bus “313,” belonging to a previous mission that had lost communication with the base compound. Gunner finds that all on board have died, including his wife. When they arrive at an abandoned school building, ostensibly a drop-off point for much-needed food, the four encounter another scene of utter devastation and a whole new crowd of infected folks that must be somehow overcome. What follows is pretty much an hour of additional combat sessions with the viral victims as Denise and Lauren, having gotten separated from their bus and driver, must find some way to cope with this nightmarish world. During their basic struggle just to stay alive, Lauren reveals to Denise what was her real motive for joining this incredibly dangerous mission.

After a ninety-minute journey through the ravaged landscape that used to be America’s second largest city (and filmed on location), this tale, told in the director’s own words, is “rather than a found footage movie, I consider it more as a POV first-person movie.” This cinéma vérité style film, highlighting a virulent disease that zombifies its victims before it kills them, now joins the company of 28 Days, Carriers, and Quarantine), all B-movies that dealt with the aftermath of a widespread contagion. Pandemic had the potential to raise the bar of this horror film genre, given its experienced principal cast of Nichols, Phifer, Pyle, and Allen with brief but strong support from veteran character actor Guilfoyle. Benson’s uninspired and hackneyed script, coupled with Suits’ lethargic pacing, undermines what little suspense or interest is actually present in yet another virus-versus-us flick. Pandemic had a relatively short theatrical run and is now available on demand from various streaming and VOD outlets.