How to be Single (TheaterByte Movie Review) 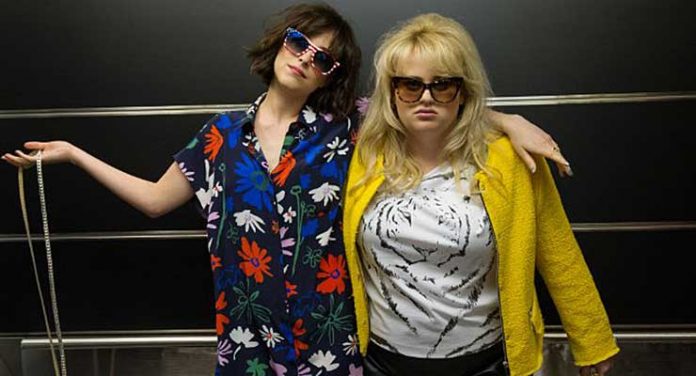 How to be Single is basically a Sex and the City ripoff. We have four women navigate the trials and tribulations of being single in Manhattan, and their encounters with various men. First off there’s girl next door Alice (Dakota Johnson of Fifty Shades of Grey fame playing the Charlotte character from SATC — very pretty 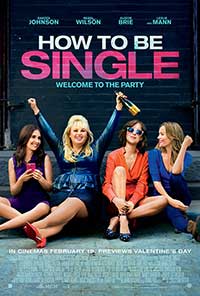 and very nice). She decides to take a break from longtime boyfriend Josh (Nicholas Braun) and head to New York City where her big sister Meg (Leslie Mann) lives. Alice arrives in the big apple newly unattached. She also starts a new job as a paralegal in a downtown law firm where free-spirited wild and crazy Robin (Rebel Wilson) works. Robin shows Alice around the office, including the rooms where not to have sex with co-workers. Robin (the Samantha from SATC) is an expert at being single, and she wants to share her single life, and New York City’s singles party culture, with Alice. Robin is a party hard, one-night stand kind of gal and she literally teaches Alice how to be single. The aforementioned Meg (a dead ringer for Miranda from SATC) is a successful career woman who has it all but neglects to have a personal life. Even though she’s an obstetrician, she’s very uncomfortable being around children. Then finally there’s Lucy (Alison Brie), whose determined to find the perfect man. Sociable and pretty Lucy (Carrie from SATC) has created an algorithm to find a man online in the most efficient and practical manner. She’s always on her computer not realizing that the perfect man could be right behind her. So we’ve got four women navigating Manhattan’s singles scene — just as in Sex and the City.

Alice dates a series of men, including single dad David (Damon Wayan’s Jr.), though he’s not quite open with her about his past as he should be. Lucy doesn’t realize that the perfect man for her is Tom (Anders Holm), who owns the downstairs bar in her apartment building where she uses the wi-fi because she can’t get a signal in her apartment. And then Meg accidentally meets receptionist Ken (Jake Lacy) after she has decided to have a baby and attempts to hide her pregnancy from him (If you remember in SATC, high-flying lawyer Miranda falls in love with a bartender). But there’s nothing really laugh out loud funny at any of these women’s relationships, they’re actually quite tame, and normal. And it’s supposed to be party girl Robin to provide the laughs but there aren’t that many. For Robin it’s all about bars and parties where the boys buy the drinks. And in a cringe-worthy moment she shares a sauna with Alice where we find out what her drink number is (the number of drinks you have with a man that means you’re definitely going to have sex with him) — 27; 24 if she’s by herself. And in the sauna Robin comments on Alice’s private parts – telling her “is that Tom Hanks from Castaway?.” Robin says that the thing about being single is that you should cherish it. How to be Single doesn’t really show us that there’s much to cherish being single, as three of the four women are constantly on the lookout for a other half. And what’s the point of going to see a movie that should be celebrating being single but instead is lamenting being single. Best to watch an old Sex and the City rerun or one the two films — there’s more laughs in those than in this movie.