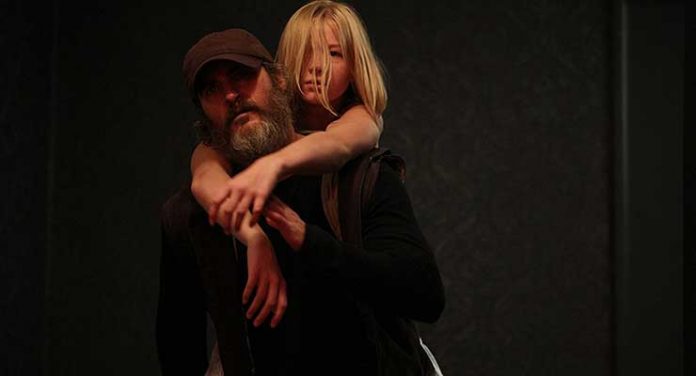 You Were Never Really Here tells the story of Joe (Joaquin Phoenix), a former FBI agent and military vet suffering PTSD. He tends to his ailing mother by day and by night he smashes in the skulls of evildoers. Joe’s methods are pretty straightforward and blunt.

After disrupting a sex trafficking ring Joe has a ton of heat on him and is spotted by his middleman’s son after cleaning out the brothel. This leads to some very unsavory setting their sights on Joe and his mother. The rabbit hole goes even deeper and it is implied that one of the victims of the sex trafficking operation was being abused and exploited by a high-ranking official with some serious clout.

The film is Lynne Ramsey’s follow-up to her critically acclaimed film We Need to Talk About Kevin, which was released in 2011. You Were Never Really Here is a tight and taught thriller that showcases Phoenix’s intensity – you see him as a highly trained brutal killer inflicting carnage, but then you see him as a loving son taking care of his elderly mother in his childhood home. These scenes are intercut with flashbacks of his childhood, which was traumatizing, and to a few of his military assignments.

I remember when I first saw the trailer to You Were Never Really Here and I thought to myself that it reminded me of Taxi Driver, Drive, and Oldboy. I wouldn’t go as far as comparing this film to Taxi Driver due to Joe not necessarily being psychotic – I never saw a Travis Bickle similarity. Joe is not a disconnected person like Travis was, he is very much in tune to his environment.

Another thing that elevates You Were Never Really Here is its controlled use of violence. Joe’s close-quartered combat weapon of choice a steel ball peen hammer. He smashes people in the head and face with it until they are dead. These scenes are always shot with more of an emphasis on the force of the hit (with sound design) or a cutaway, or an image of a security camera with the aftermath showing a body lying on the ground. The hand-to-hand combat style in this film is not as graphic as the promotional materials are making it seem. It’s definitely not Oldboy.

You Were Never Really Here also has a great visual aesthetic. Ramsey and her team have design a sleek environment where very real monsters live. This drives the psychological element forward – I also would categorize it as a slow burn type of film, as well. The irony of my slow burn comment is that the film runs for 89 minutes, with credits, so you would think that the film does not have time to slow down.

It is with these flourishes that Lynne Ramsey has crafted one of the better films of 2018.The film is highly recommended.

4 / 5 TheaterByte Rating
{{ reviewsOverall }} / 5 Users (0 votes)
Why Not Productions | Film4 | British Film Institute (BFI) Production Board | Amazon StudiosStudios & Distributors
R (for strong violence, disturbing and grisly images, language, and brief nudity)Rating Certificate
UK | France | USACountry
EnglishLanguage
90 Mins.Run Time
2.35:1Aspect Ratio
Lynne RamseyDirector
Lynne RamseyWriter
6 April 2018 (Limited Release) | 20 April 2018 (Wide Release)Release Date
The Film
Summary
A veteran suffering from PTSD (Joaquin Phoenix) who tracks down missing girls being trafficked for sex takes on a particularly difficult case that spirals out of control and has him confronting his personal demons and the demons of reality. Phoenix delivers an at once explosive and controlled performance in writer/director Lynne Ramsay's You Were Never Really Here and the film makes a strong play as one of the best of the year.
What people say... Login to rate
Order by: