We have two copies on Blu-ray available of the drama A Letter to Three Wives from 20th Century Fox available for a giveaway. See below for details and information on how to enter.

Enter to Win a Copy of A Letter to Three Wives 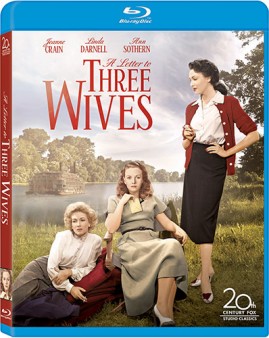 Joseph L. Mankiewicz’s timeless Best Picture Nominee and two-time Oscar® winner* (Best Directing and Best Screenplay) is even more intriguing on Blu-ray™. Ann Sothern, Linda Darnell and Jeanne Crain star as three women whose boat trip is delayed when they receive a letter from a friend who claims to have run off with one of their husbands.

For a chance to win your copy of the Blu-ray just visit us on Facebook and answer the question below:

Which two Oscars nominations did Joseph L. Mankiewicz receive for A Letter To Three Wives?

A. Best Directing and Best Screenplay

B. Best Directing and Best Picture