We have three copies of the action-packed martial arts biopic Ip Man: The Final Fight on Blu-ray Disc available to giveaway to three of our lucky readers. The Blu-ray was recently reviewed here by our very own Brandon A. DuHamel who said of veteran star Anthony Wong: “His…presence permeates the film.” See below for further details and for information on how to enter for your chance to win one of the three copies.

“Anthony Wong truly drives the film as an elderly martial arts grandmaster who despite adapting to the time, sticks to his philosophy of his passion of martial arts. Definitely a must see ….”
– Albert Valentin, KUNG FU CINEMA.com 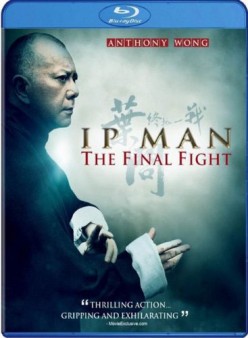 PLANO, TEXAS.  (September 23, 2013) – The legendary teacher and Wing Chun grandmaster returns to the screen for the action-packed martial arts drama IP MAN: THE FINAL FIGHT, available on Blu-ray™ and DVD November 12th from Well Go USA Entertainment.  The film depicts a realistic account of Ip Man’s later life in Hong Kong as he struggles against the vicissitudes of life: his pursuit of a romance with a young singer after his wife’s death (against the wishes of his disciples); his relationship with his elder son; and his thoughts on Bruce Lee, who would become his most celebrated student.  Directed by Herman Yau (The Legend Is Born: Ip Man), IP MAN: THE FINAL FIGHT stars Anthony Wong (White Vengeance, Infernal Affairs), Eric Tsang (Infernal Affairs), Jordan Chan (White Vengeance), Gillian Chung (The Midas Touch), newcomer Marvel Chow, Anita Yuen (Thunderbolt), Xiong Xin-xin (Shaolin, Tai Chi Zero) and Wong Cho-lam (Beauty and the Seven Beasts). Bonus materials include a “Making of” featurette and interviews with the cast and crew.

Synopsis:
In postwar Hong Kong, legendary Wing Chun grandmaster Ip Man is reluctantly called into action once more.  What began as simple challenges from rival kung fu schools soon finds him drawn into the dark and dangerous underworld of the Triads.  Now, to defend life and honor, Ip Man has no choice but to fight – one last time…

IP MAN: THE FINAL FIGHT has a runtime of approximately 101 minutes and is rated PG-13 for martial arts violence and some drug related material.