“… a diverting romp that makes no apologies for its entertainment for entertainment’s sake attitude.” – Elizabeth Kerr, THE HOLLYWOOD REPORTER

Bonus Materials Include a “Making of” Featurette 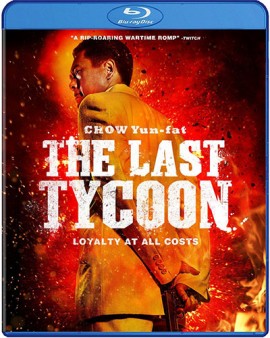 Dragon, The Assassins) and powerhouse director Wong Jing (Legend of the Red Dragon, City Hunter) comes the bloody, adrenaline-fueled THE LAST TYCOON, debuting on Digital, Blu-ray™ and DVD September 17th from Well Go USA Entertainment. Spanning 30 tumultuous years in Shanghai beginning at the turn of the twentieth century, the film tells the story of the rise and fall of real-life gangster Cheng Daqi (Yun-Fat) and his violent swath through the criminal underworld.  The film also stars  martial arts icon Sammo Hung (Ip Man 2: Legend of the Grandmaster), Francis Ng (Infernal Affairs II), Huang Xiaoming (The Guillotines, The Banquet), Yolanda Yuan (Once Upon a Time in Shanghai), Yuan Li (Empire of Assassins) and Monica Mok (Ocean Flame). Bonus materials include a behind-the-scenes “Making of” featurette.

Synopsis:
For Cheng (Chow Yun-Fat), innocence and young love are shattered by circumstance, wrongful imprisonment, murder, and escape. He finds himself in the crime gangs of Shanghai and apprenticed to the local “tycoon” (Sammo Hung). As the years pass, Cheng rises to the upper echelons of power and finds himself torn between the love of two women, the murderous plots of the secret service, and the looming threat of war that may destroy the entire city.

Bonus Materials Include:
§  “The Making of The Last Tycoon” featurette
§  Trailer

THE LAST TYCOON has a runtime of approximately 119 minutes and is not rated.

Visit Us on Facebook for a Chance to Win