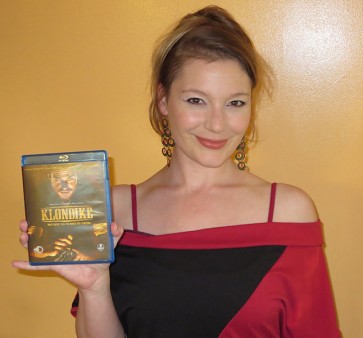 Prepare to be enchanted  by Discovery’s first ever scripted mini-series as it embarks on a historical journey, back to in time to 1897. Far beyond the reach of civilization lay a cold lawless land that beckoned with the promise of gold. It was the Klondike Gold Rush, over 100,000 prospectors flocked to it at risk of their own peril.

With its breathtaking scenery and strong ensemble cast, Klondike recreates the struggles of frontier life. Based on Charlotte Gray’s book “Gold Diggers: Striking it Rich in the Klondike” this series features a variety of real life characters including famous novelist Jack London. You’ll be sure to get an education with this guilty pleasure.

From the snow covered landscape, to the thick fur coats and wolves, not to mention the dearly departed Rob Stark, Game of Thrones fans will notice several visual familiarities in this series. Alive and well after the horrific Red Wedding, Richard Madden plays the young Bill Haskell a man of moral principle not unlike the Stark character. With a head full of hope and limitless ambition, he and best friend Byron Epstein (Augustus Prew, KickAss 2) set out to make their fortunes in Yukon Gold, but first they must brave the elements.

From one obstacle to the next, they survive an avalanche only to face white water rafting and near drowning. Nature can be cruel. With no modern conveniences to protect against nature’s harsh conditions, it’s a battle of wills to see who survives. The two boys make it to Dawson City only to be confronted with more problems.

Raw, with a fresh off the boat look about them, Bill and Byron draw the attention of Dawson’s unruly citizens. It is here in this lawless town that the show’s colorful cast comes together. Sniffing around for trouble is sharp-eyed businesswoman  Belinda Mulrooney (Abbie Cornish, Limitless), a historical character once known as the richest woman in the Klondike.

I was slow to warm up to Cornish in this particular role. She seemed out of place with her over the top tough bravado. Too kittenish in appearance to pull off the rugged tough as nails frontier woman, it took some adjusting to accept her character. As the series progresses and Belinda drops her guard so does Cornish and the rough edges melt away. It was the electric chemistry between Cornish and Madden that completed the transformation. They are the hope, the promise of a brighter future, they are our heroes.

Every story has a villain and here it’s Tim Roth (Planet of the Apes), the trigger happy morally bankrupt “Count.” With no good to speak of, he’s a self-centered survivalist who would rather commit murder than negotiate. He represents the wild animalistic part of man, the part that can’t be tamed. Roth plays the local devil in direct opposition to Father Judge played by Sam Shephard (Safe House). On a mission to save souls, and spread the word of God among the uncivilized Father Judge begins to lose more of his faith than he spreads. Both of these A-list actors sizzle on screen, watching this dynamic duo of good and evil is very satisfying.

As Bill soon learns the Klondike has a way of zapping the humanity out of a person. No matter how refined a gentlemen is the barbarian within often wins. Men kill not just for gold, but for the hope of it. Bill Haskell represents all that is civilized in this savage place, a point Belinda runs into the ground. Terrified the wild will tarnish his good nature she pushes him to leave it behind before it ruins him too.

Proving herself in a man’s world, when women weren’t allowed to vote or have rights Belinda found equality on the cold frontier of the Yukon. And though she loved Bill, she wasn’t going to give that up for him. Instead she encouraged him to get out before his spirit was crushed.

Writers Rachel Abramowitz, Josh Goldin, and Paul T.Scheuring (Prison Break) tease out the issues of an era. They delivering a well researched show touching on the issues of the era, from sexism to antisemitism and the struggles presented by the frontier life.

While Richard Madden carries the weight of the show effortlessly, he was burdened with too much. With such a talented cast it was disappointing that they weren’t more fleshed out. Marton Csokas (The Bourne Supremacy) plays the Superintendent who struggles to bring order to an unruly town, Conor Leslie (Dirty Beautiful) is the eye catching prostitute Sabine, Ian Hart (Finding Neverland) plays sleazy con man Soapy Smith, Johnny Simmons (The Perks of Being a Wallflower) marvelously portrays aspiring author Jack London and Tim Blake Nelson (Lincoln) is Joe Meeker, Belinda’s relative and eventually Haskell’s mining partner.

This could have easily been an ongoing series. I felt there wasn’t enough time to fully explore some of the points the writers made. For example, how the indigenous people handled the effects of mining was touched on, but remained an underdeveloped subplot.

Overall this was a beautifully done, well researched mini-series that will simultaneously hold your interest and give you a peek at what life was like during the Klondike Gold Rush. With a few missteps when it comes to subplots, it’s far from perfect, but still enjoyable.

Klondike is a beautiful AVC encoded 1080p transfer in 1.78:1. With very little special effects, all of the high end visuals are a direct result of on-location filming. Up in the snow covered mountains, there are plenty of breath taking landscape shots, snow flurries and more mud than you can shake a stick at. Delivered with such crisp detail it’s easy to visualize how physically demanding the life and times were in this historical series. Watching the people work in the elements, their boots sinking into the mud as their fur jackets grow heavy with rain water, there are plenty of unforgettable images. This series isn’t popping with color, it’s about as vivid as mud and snow can be however this makes even the smallest trace of color stand out. An orange leaps off the screen with an intense vibrancy, quickly becoming more beautiful than gold. Green grass, a woman’s lipstick, and what few leaves the winter trees cling to all stand out in direct opposition to the series more monochromatic colors. As the production tends to favor natural light there are moments when the lighting affects clarity, especially the evening shots. For the most part, the contrast is decent and the series offers excellent depth of field.

This lossless DTS-HD Master Audio 5.1 provides an auditory feast. From the leaky buildings in Dawson City to the lively dancing in the saloon, you’ll have a warm sensation of being in the midst of a new frontier. Both the ambience and the score place an emphasis on the harsh environment our characters must face. The LFE was particularly noticeable during an avalanche in the beginning of the series. With clean dialogue and an extensive range this track is sure to immerse you in the elements.

With high end production value, historical aspects and a talented cast this is a mini-series you’ll want to see. It’s a startling story about a man who finds himself in the most unlikely of places and by its very nature should appeal to fans of Deadwood. This is a great leap for Discovery, if the scripted shows continue along these lines I’ll eagerly await more.