Heroes and villains aren’t born that way — they’re made. Time and again Once Upon a Time reiterates these common sense truths. It’s easier to blame the world, than shoulder the hefty responsibility of personal choice. Anyone can be a hero, it just takes a little courage to do the right thing. Of course being a hero often requires sacrifices most don’t want to make. Not being a hero doesn’t make someone a villain, but seeking revenge instead of forgiveness just might. Villains want happy endings too, but unlike the OUAT heroes they don’t want to work for it. So they take the easy way out, which as it turns out isn’t all it’s cracked up to be.

Robert Carlyle delivers yet another stunning performance, showcasing his talent as he goes from The Dark One to The Light One. The cadence of his speech changes, his posture improves, he essentially glows from within. He’s finally happy mostly because he believes that for once and all he too is a good person. While he credits this newfound self worth to the author’s swift words that have rebalanced the fairytale world, turning former villains into heroes and vice versa – the truth is Rumpel could have done this on his own anytime. All he needed was the courage to believe in himself but he doesn’t realize it until it’s too late.

I thoroughly enjoyed seeing Ginnifer Goodwin all dolled up as the Evil Queen. It was a fantastic reimagining, and one of my favorite major role reversals. Snow White is adorned in wickedly beautiful gowns befitting her new role. All the same lavish wardrobe we’ve grown accustomed to seeing on Regina’s past self are now on Snow. From the make-up, to hair, and all the accessories in between it’s clear that the Evil Queen only dresses in the best. She’s an evil knockout. I did find it interesting that when Regina was evil she was often painted in dark hues, deep red lips and heavy black eyeliners. Whereas the Evil Snow, is done up with the same expert craftsmanship, but her chosen hues while still deep, aren’t as vivid, it’s like the show wants to make it clear that underneath it all her softer side still exists.

Oh no! What happened to Captain Hook??? So sad to see the dashing pirate turned into a quivering mass of cowardly man. Admittedly, Colin O’Donoghue pulls it off so well it’s easy to wonder if underneath his brash pirate demeanor there wasn’t a coward waiting to come out. Despite his loss of bravado he still manages to be charming though this, among other things, dampens his romance with Emma. 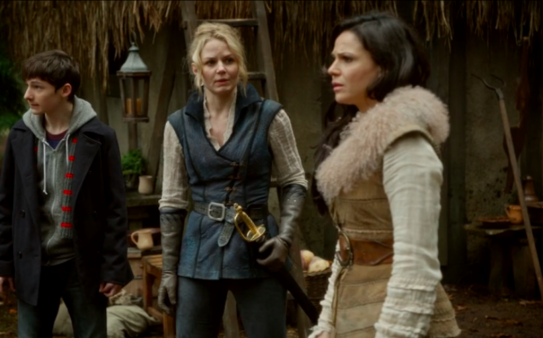 With Rumpel as a new found hero, he’s left some large villain shoes to fill. And who better than our darling savior, Emma Swan, to fill them. All those hints about Emma turning dark are finally paying off! Just not the way I imagined. She becomes The Dark One (surprise!). Sure she did it selflessly to save Regina from being evil again, but somehow I doubt that will have an effect on her role. I’m curious to see how Henry handles his mom as The Dark One.

Not without powers of his own, Henry has become the new author. This is by far his best role yet. Jared Gilmore has done a lot of growing on this show, both as a character and as an actor. I’ve long suspected he had more to offer, but so rarely given the opportunity to shine. All those years studying fairytales are about to pay off. The real question is how much will Henry interfere? Considering his family connections, it’s hard to believe he can approach his new role without a certain bias for his own relatives. Not sure I could.

As this season comes to a close, I am both delighted and surprised that there isn’t a single new villain in sight. There is only Emma. A beloved well known character who is no longer a hero. The first season revolved around Emma the Savior and now the fifth will focus on Emma the Dark One. I can hardly wait to see where OUAT goes with such a captivating concept. If this finale is any indication, the fifth season may be the best yet!