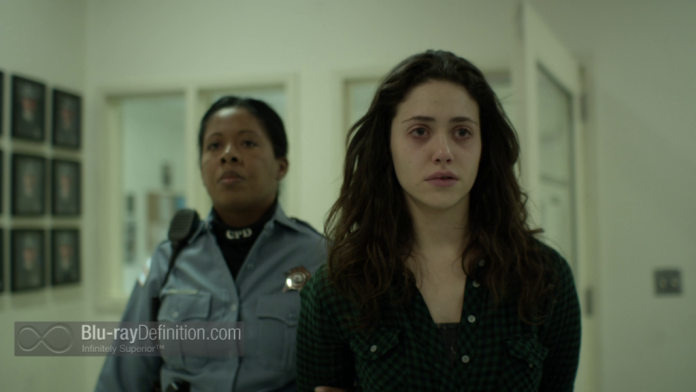 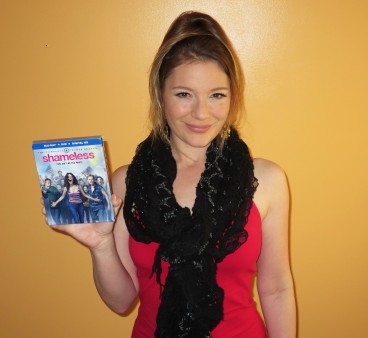 In its fourth season Shameless is at it’s best yet as the Gallagher clan moves up in the world. Fiona Gallagher (Emmy Rossum, The Day After Tomorrow) is the one that holds it all together, raising her siblings as their no good alcoholic father, Frank (William H. Macy, The Lincoln Lawyer) pursues his own self-centered quests. Up until now life has been a struggle as the family struggles to makes ends meet each month. Paying rent and putting food on the table has been a constant battle until now.

Fiona scored a nine to five job with benefits, a 401k and a salary that will place the Gallaghers above the poverty line once and for all. And she’s doing it honestly. Fiona is on the verge of something great, which is exactly why we should worry. The Gallagher’s were never meant to do well. They are chaos incarnate, fun and loveable to watch, but destined to be repeat offenders. So as we watch them rise, keep in mind, the higher they rise the harder they fall. And this particular Gallagher is having an identity crisis. Outside of her family she doesn’t know who she is anymore. She’s self-scarified for so many years, she no longer knows any other way and despite her best efforts she is still her father’s daughter. Prepare yourselves – Fiona has never been this irresponsible and the consequences are devastating. 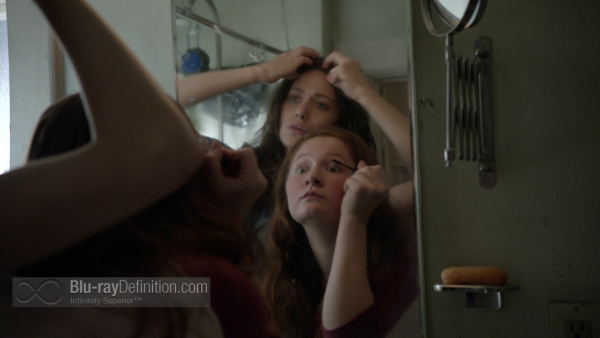 Away from home, Lip Gallagher (Jeremy Allen White, Movie 43) is in for a real shock as he begins to discover his own limitations this season. Lip has always been the smartest one in the room and because of that he could get away with anything. Now that he’s away at college, he’s no longer the big fish in a small pond but it still takes him awhile to realize it. He can no longer half heartedly write an essay and expect to get an A+, mostly because his college professors see right through that. While grappling with his potential future Lip finds himself in an oddly beneficial but strange relationship with his dorm mate’s girlfriend. Amanda’s a spoiled rich girl who knows what she wants when she sees it. She pursues Lip, attracted to his dysfunctional life style, Amanda sees him as a means to aggravate her stiff parents. If he plays along, he’ll be rewarded with a plethora of sexual favors and material gifts. What male college freshman wouldn’t want that?!

This is Kevin’s (Steve Howey, Something Borrowed) season to shine. He’s developed into a character worth watching. He’s evolved from sidekick to main attraction and takes on a parental role, not just towards his own impending offspring but towards Lip as well. Kevin dispenses more than a few nuggets of wisdom this season. He and Veronica (Shanola Hampton, You Again) go through the hilarious ups and downs of parenthood.

Ethan Cutkosky has really grown into his character and as a result begins to handle more complicated material this season. He’s no longer the ruthless, ignorant deviant. Don’t get me wrong, he still embodies those elements, but now he’s so much more.

Much like Carl, Debbie (Emma Kenney, Epic) is also doing her best to grow up. With no real role models, she looks to her friends for guidance on what to wear, how to behave and more importantly how to handle men. She fumbles with makeup and high heels like a little girl desperate to find her place in the world. It’s pitiful. Not to mention incredibly awkward. Which really is the best way to describe Debbie this season. She needs a maternal figure now more than ever, but her big sis Fiona is too busy screwing up to be there when she’s needed most. It’s a first for the family.

In a flamboyant turn of events, Ian (Cameron Monaghan, The Giver) is out for the world to see, gyrating on stage at a popular men’s club. It’s hard to tell if Ian is on drugs or experiencing some sort of manic behavior, either way it’s clear he isn’t himself these days. Actor Cameron Monaghan does a great job with this, without over acting he plays a very convincing manic personality. What this means for Ian’s future is anyone’s guess.

Mickey (Noel Fisher, Red) is caught between his pregnant Russian wife, domineering father and jilted boyfriend, Ian. At some point Mickey will be forced to choose. He can’t straddle this fence forever. Or can he?

I never thought we’d see the end of Frank Gallagher. Even though he is just one of many characters on this show, I can’t imagine Shameless without him. He’s the center. Yet here he is on his deathbed, filling viewers with dread. What would become of this show if Frank died? The liver can only take so much and Frank’s is calling it quits. A dying man is a desperate one and Frank is willing to do just about anything to survive. As always William H. Macy puts on an amazing show. I couldn’t imagine anyone else as Frank. His performance alone is worth watching.

With his failing liver, Frank must now rely on the kindness of the family he once shunned. While most of his offspring couldn’t care less, he manages to find the two still willing to see past his abusive, user mentality. He pins most of his hope on long lost daughter, Sammi (Emily Bergl, Blue Jasmine), who falls under Frank’s spell. Initially aroused and attracted to this overly affectionate man, she begins taking care of him and offers him her liver before she knows Frank is actually her father.  This shows constantly pushes the boundaries, making us wonder: how low will Frank stoop to get a liver?

Meanwhile Sheila Jackson (Joan Cusack, Toy Story 3) is suffering from empty nest syndrome. Desperate to have a house full of love (and children) she eagerly tries to adopt a group of Native Americans. Sheila is one of the zany, yet responsible characters on the show. You never know what she’s going to do. Joan Cusack shines in this series, from her first moments in season one as an agoraphobic to the outspoken women she’s grown into, she continues to command our attention.

Overall, season four is easily one of the best yet. Shameless has grown into a show that leaves you wanting more. The characters continue to be as unpredictable as ever thanks to well plotted writing and excellent direction. 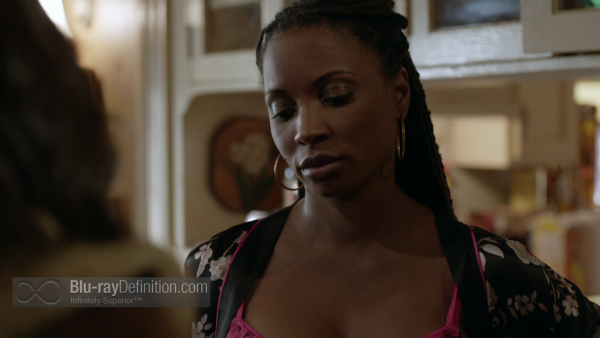 This fourth season of Shameless looks amazing! Sure the skin tones are pale, but that’s part of the point, a stylistic choice more than anything else. Details are clear and concise. Looking at Emmy Rossum’s big brown eyes you can really see the fear she’s trying to convey as she embarks on her new life as a felon. The overly applied make-up really stands out on Debbie, making her look worse than usual which was of course the point. Every line on Frank’s face could be traced and every pore and unshaven whisker could be counted. The colors and contrast were steady and strong, with suitable black levels and uncompromising clarity. All in all, season four was well done. 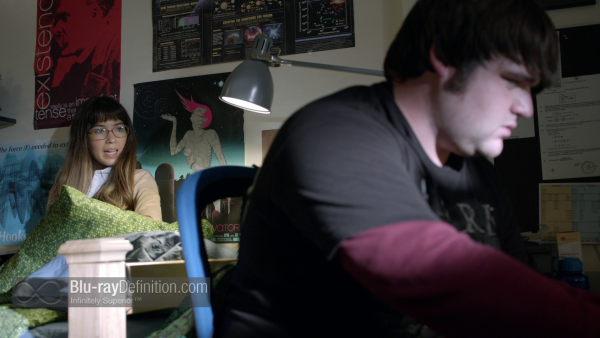 Shameless shows off its DTS-HD Master Audio 5.1 soundtrack in its fourth season Blu-ray release. This dialogue driven show rarely disappoints, offering a well-balanced audio experience for all. From the explosive heart pounding music at Ian’s new club, to the somber full cavity inspection Fiona endures as an inmate this soundtrack takes you there, creating a fully immersive experience. This sounds amazing on the home theater system and really puts the LFE channel to good use. 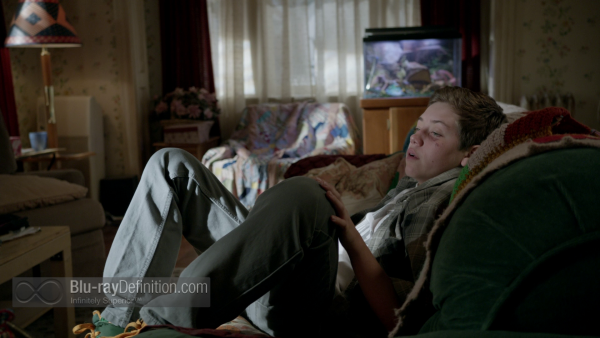 * A three disc DVD set is also included with this set* 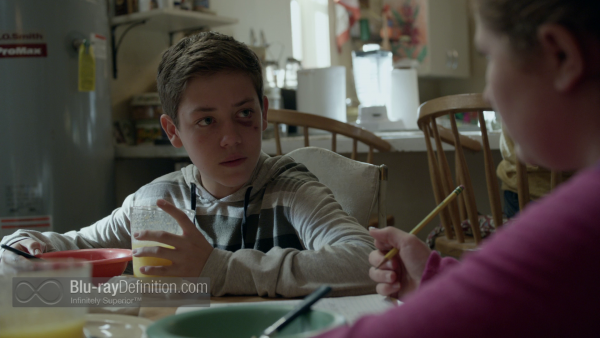 This is a season of Shameless worth owning. The show has morphed into a series of substance as the characters experience real growth this season. With great performances from the talented ensemble cast, superb writing and a well plotted story, Shameless fans won’t want to miss this one.