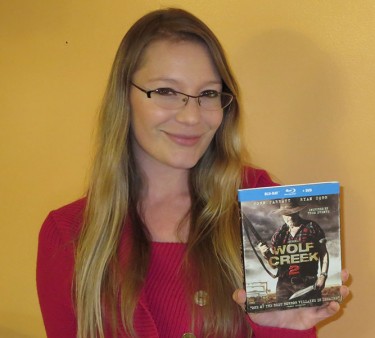 Director Greg McLean (Wolf Creek, Rogue) delivers another stomach churning film with the return of Aussie John Jarratt (Django Unchained) as the pig farming serial killer, Mick Tayler. With a propensity for violence, the film wastes no time in acclimating its audience. Right away we see Mick’s dark nature, as he shows two police officers what he thinks of the bunk ticket they wrote him. It was a gruesome scene, full of shock value but nothing compared to what he does to the tourists.

Young adults, without a care in the world, backpacking around the Australian Outback become easy pickings. Mick preys on these dumb darlings, satisfying his taste for human flesh before anyone even notices they’re missing. His seemingly cheerful, harmless nature is contradicted by his lust for blood — his smile will send shivers down your spine. Jarratt plays an unforgettable psychopath, one sure to inspire nightmares, or at the very least make you think twice about backpacking around the country.

A man like Mick hates interruptions, so when British tourist Paul Hammersmith (Ryan Corr, Where the Wild Things Are) accidentally gets between Mick and one of his victims it becomes personal. The film goes from random murderous encounters to a focused game of cat and mouse. Paul must run for his life. We know Paul is a dead man, but watching Mick track him down still provides a sense of hope. In mind numbingly violent films like this, a sliver of hope becomes a radiant beacon of light to cling to.

Death decorates Mick’s dungeon, from the starved women to the old skeletons, it’s not what a person wants their last memory to be. And yet it’s here that Paul and Mick finally face off in a rather disturbing scene. Mick’s inner sociopath takes front and center in a bizarre turn of events.

While the film and its star predator got off to a strong, albeit predictable, start with fast-paced gratuitous violence, by the time we got to the middle it fell apart. There was an unsettling back and forth between the killer and his victim that caused a lag in the pace. Luckily the pace picks up once more in the third act and Jarrett goes back to being a gleefully deranged killer.

Keenly aware of the film’s visuals aspect film Director Greg McLean seamlessly incorporates the locale into his film. From the desert outback landscapes to the kangaroos hopping across the highway you’ll never see the outback the same way again. McLean has made this sunny place into a home of terrors. Worse there is no moral in all of this. It’s just gore. It’s a terror inducing shock-fest with an offensive villain designed to make you shudder and nothing more.

Wolf Creek 2 is presented in an AVC-encoded 1080p transfer in a 2.40:1aspect ratio. Filmed on both an Arri Alexa and a GoPro (to capture those close-up intense stunts) this film’s technical quality is leagues above the first one. Thankfully the bitrate is kept high at all times so you’ll never miss any of the intricate action sequences or gorgeously crafted gore. When it comes to blood, guts and splatter this movie does it all exquisitely. With great color, vivid bloodshed, and nice black levels there isn’t much to complain about it.

Presented in DTS-HD Master Audio 5.1 Wolf Creek 2 offers a dynamic mix giving the speakers a workout.  It’s an immersive experience, from the ambient sound of isolation in the Australian Outback to the ferocious invigorating chases that get your blood pumping, down to the screams of horror in the midst of a gut wrenching murder this audio mix thrusts you in the midst of it all. The music never overpowers the dialogue and always serves to reinforce a scenes emotional impact. Some of the accents take getting used to, but if you have an ear for language that shouldn’t be too hard. Overall this is a quality sound mix.

Overall this was a technical masterpiece, a well written menacingly bloody film laced with humor. Personally I’m not into the horror without redemption genre. I prefer horror films to end with a sense of justice which this one did not. Though this movie wasn’t suited to my tastes, I can still appreciate it as a product. Terrible things happen to good people for no reason at all, don’t expect a light at the end of this tunnel. Gratuitous violence and blood make it a cringe worthy flick that’s best watched with a buddy.