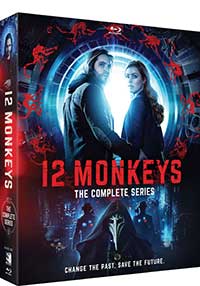 12 Monkeys is the SyFy Original series based on Terry Gilliam’s 1995 dystopian science fiction fan-favorite film of the same name.

In the series, a man from Earth’s post-apocalyptic future, James Cole (Aaron Stanford) must use a dangerous method of time travel invented by a scientist from his present to return to the past and prevent a devasting virus from wiping out much of humanity and causing an apocalyptic future. He finds Dr. Cassandra Railly (Amanda Schull) in the past who seems crucial to helping to stop the plague and she becomes his partner in stopping what is to come as the two hunt down the origins of the virus, search for and potentially kill a mysterious Dr. Leland Goines (Zeljko Ivanek), and cross paths with Goines’ daughter Jennifer (Emily Hampshire) who also has a very important role to play in the future of humanity, as will be seen as the series progresses.

As this is obviously long-form television and not a film, there have been some tweaks made to the original plot and characters and there is far more time to develop the arc. The first thing people will notice is the Brad Pitt character from the film has been given to the very capable female actor Emily Hampshire who portrays the character’s mental health issues sublimely, perhaps more subtle and nuanced than Pitt did in the 1995 film.

And this is a series that gets better from one season to the next. Season one gets off to a slow start, but by season four 12 Monkeys is in classic sci-fi drama territory. Sure, the time-traveling cannot help but get caught in the inherent pitfalls and paradoxes of the genre but looking beyond that what we have in 12 Monkeys is a treatise on existence. It’s a philosophical study of what life is, what time is, and if self-determination exists.

One could go into the minutiae of differences between this series and the Gilliam film, but that would also give many of the plot twists away. Certainly, this series did not have the budget of the big screen original, but it accomplished a lot with what it had and always felt quite atmospheric and dystopic in the futuristic scenes and believable in its “past,” our present. Visual effects were believable and thankfully not overused. In fact, the cinematography combined with the visual effects for this series was magnificent.

Four seasons seems like shortchange for such a solid sci-fi series, but given how the series wraps up, it feels like it got a good ending. 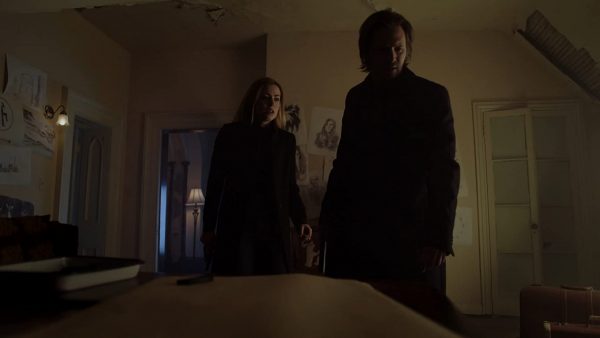 12 Monkeys was originally shot digitally in 1080p using the Arri Alexa Classic EV camera. In season two it transitioned to using the Alexa Mini. Cooke 5/i and S4, and Leica Summilux-C lenses were used. The series arrives in an AVC 1080p encodement framed at 1.78:1 and it does have very film-like appearance despite being a digital production. All four seasons are included on eight Blu-ray discs and the bitrate is not exactly the highest I have ever seen, however. At times it dips into single digits and rarely rises above the low 20s. That said, the picture mostly looks good with natural flesh tones and excellent detail, but it can often tip into noise in the shadows and look a little bit patchy.

12 Monkeys comes with an English DTS-HD Master Audio 5.1 mix as the only option. The sound is clear with good stereo panning, but the surround effect is minimal at best with only some low-level atmospherics in the surround channels. One barely notices any sort of solid sound effects making their way into the surround channels. Low end is good enough to provide some weight but does not extend way down into the lowest registers.

12 Monkeys comes to Blu-ray with a collection of deleted scenes, cast auditions, webisodes, podcasts, and a gag reel. The deleted scenes are interesting and help to fill out some of the plot as do the webisodes.

Mill Creek Entertainment brings together the entire collection of this great sci-fi series for the first time. If you want to binge some thoughtful, fun to watch sci-fi, this is a good set to get.

12 Monkeys: The Complete Series is out on Blu-ray & DVD July 14, 2020 from Mill Creek Entertainment 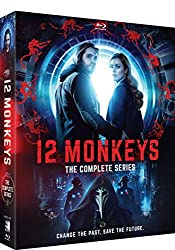