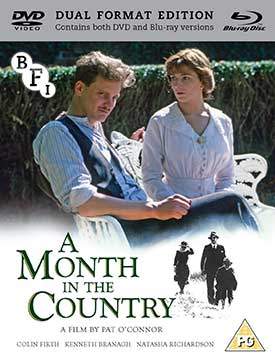 Pat O’Connor directed this Simon Gray adaptation of the J.L. Carr novella A Month in The Country. Set in the tranquil rural English village of Oxgodly, in 1919, the story concerns a soldier, Tom Birkin (Colin Firth) who comes to the area to convalesce and heal his mental wounds suffered from the devastation of the war. While there he works on restoring a medieval period church mural that has been hidden under multiple layers of plaster and paint. In Oxgodly, Tom meets another war veteran also there recuperating, archaeologist John Moon (Kenneth Branagh) who is digging through the local fields trying to uncover an ancient grave. The two men become friends and try to work through their problems together while having a number of philosophical discussions on life, death, religion and love. Tom, meanwhile, falls in love with Alice Keach (Natasha Richardson), the local vicar’s wife, while John comes to terms with his homosexuality.

O’Connor’s film is quiet and beautifully shot in the traditional, pastoral period style of British filmmaking. It could easily pass for a Merchant/Ivory film in many ways. That said, it becomes clear that taking this perfectly encapsulated written work that spans approximately one hundred pages and stretching it into a film proves challenging. There are plenty of big themes, but not much exposition. Much is window dressing, just passing moments of time, beautifully done. A mystery to be solved – literally. Tom tries to find out why the painter of his unfinished mural never completed the work. Why are the wrong people together (Alice and her absentee husband)? Why do we love whom we do (John and his homosexual desires)? But it is all over quite quickly and without much resolution. It’s more a pretty slice of life in an endless summer hidden away from the horrors of the world. It’s nice, it’s beautiful, it sometimes makes you think, but it doesn’t follow through all the way.

The biggest strength of A Month in the Country from today’s perspective is getting to see some big stars today at the beginning of their careers. This was Kenneth Branagh’s first feature film role, Colin Firth’s third film, but his first starring role, and the late Natasha Richardson’s second film role. Each one of them does an excellent job showing skills beyond their years and giving glimpses of the greater performances that were to come.

Not much information is offered on the transfer for A Month in the Country from the BFI other than it was “delivered to the BFI in high-definition” and is presented in its original aspect ratio of 1.78:1 with mono audio (see below). It is probably the same transfer that was released by Twilight Time? In any case, this film has never looked extremely crisp, having a purposely-soft appearance for artistic reasons, but this does look clean and organic with natural colors and grain. I’m not particularly enamored with the overall look of this film, but the transfer itself certainly doesn’t show any major flaws.

The monaural mix is presented in LPCM 1.0 and is more than adequate to convey the dialogue, although at least a stereo nice would have been lovely to offer up some more ambience of the English countryside. The music and effects track in LPCM 2.0 Mono does not sound as clean and is a bit boxier, but is also a delight if you want to hear the pastoral score from composer Howard Blake.

BFI provides two excellent interviews in HD with director Pat O’Connor and actor Colin Firth. Film historians Julie Kirgo nd Nick Redman also weigh in with a detailed and interesting audio commentary. The Booklet is thinner than usual, but the essay is no less interesting a read.

A quaint, tranquil film that tries to grapple with issues like self acceptance, war, and religion in a short time frame, A Month in the Country is best for its performances from the young stars that would go on to even greater things and the beautiful pastoral imagery overseen by director Pat O’Connor. This Blu-ray Combo Pack release from the BFI is satisfying if not outright spectacular.