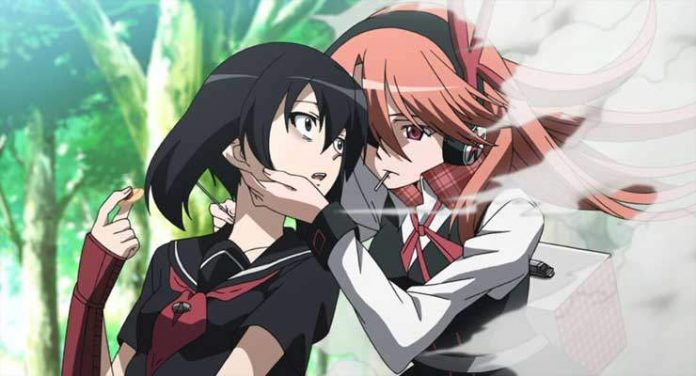 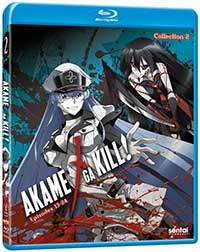 Akame ga Kill! is a brutal series that doesn’t shy away from violence in the slightest, yet it is never overindulgent in this regard. The violence always makes sense and fits in with the story and the fact that the characters and

story are engaging keeps it from ever feeling superficial. So does the more than sufficient amount of comic relief in the series. There’s almost an One Piece sense of humor, not necessarily in the look or feel, just in the way the humor comes across. And speaking of the look, this series has a great look about it too. It’s edgy and dark, even if not exactly cutting edge. But the character designs and backgrounds are outstanding, especially the female characters and the many supernatural altercations our heroes in Night Raid find themselves in. This is eye-popping animation

Collection 2 left me absolutely shocked. I did not watch this series streaming or on the Toonami programming segment, so this is my first time seeing it all the way through. Needless to say, I would not have expected the even darker turn Akame ga Kill! Would take in this next set of episodes (13-24). Night Raid and the Revolutionary Army launch their final assaults on the Capital in this second half of the series, and without giving everything away, the Imperial Arms offers the wielders major amounts of power, but it doesn’t grant them immortality. The carnage inflicted on the characters we have come to love is unbelievable. These last episodes are, like in any war, filled with death; not just the death of tertiary characters either, but of main characters. The writers should probably be given props for that, because, unlike a lot of productions – and I’m not talking about just anime – it seems like practically an unwritten rule to always make sure your protagonists survive, or most of them anyway. Collection 2 solidifies Akame ga Kill! in my mind as an instant classic anime series.

stereo and the English dub in DTS-HD Master Audio 5.1. For purists like myself, the Japanese track offers excellent sound even though it is not 5.1I still find the Japanese cast to be far better than the English cast, who are just hamming it up or falling flat, no in between. Unfortunately the English track does have the edge with what is a very well done 5.1 mix that is balanced and atmospheric and very decent use of the surround channels for some solid sound effects. Still, given that the 5.1 mix is hardly the greatest I have ever heard, the 2.0 mix with the superior Japanese cast more than does the trick.

This second collection again comes with the AkaKill! Theater shorts.  After all of that carnage these comedic, chibi shorts based on the episodes proper are a nice diversion.

There’s really no question about it – if you’re a fan of this series, then you have to complete your collection by getting this second, even edgier half of Akame ga Kill!. If you’re new to the series, be prepared for one of the darkest, coolest anime series around, with edgy action and lots of mayhem.