All Quiet on the Western Front: The Uncut Edition (1979) (TheaterByte Blu-ray Review) 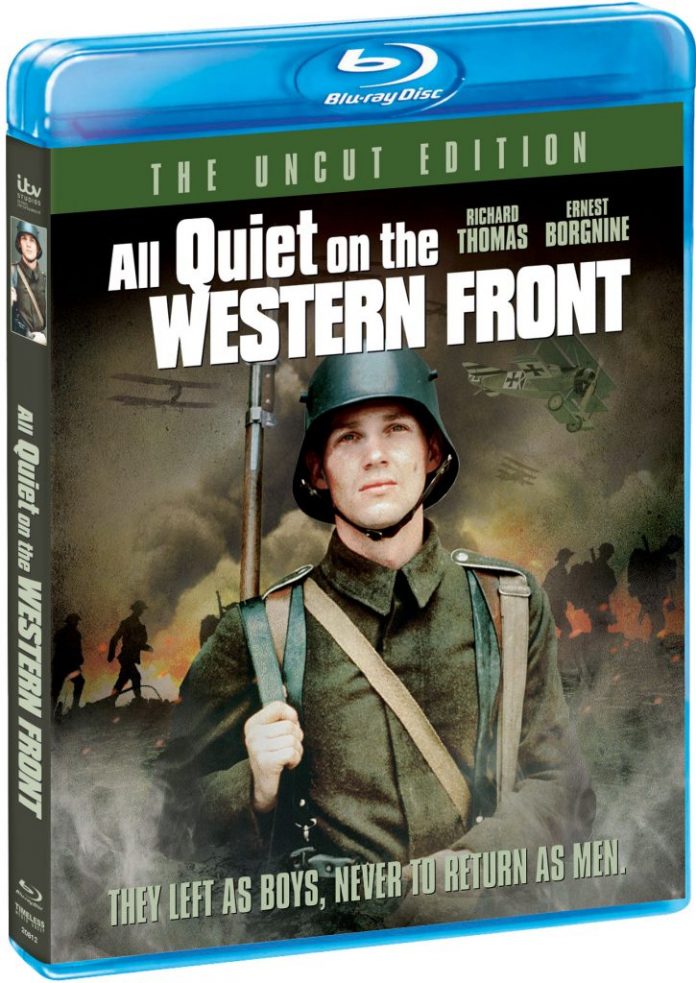 Director Delbert Mann made his career as a go-to man for big TV movie projects like David Copperfield and Jane Eyre, and in 1979 he directed this sprawling adaptation of Erich Maria Remarque’s novel for television, All Quiet on the Western Front. With its A-list cast featuring Ernest Borgnine, Donald Pleasence, Ian Holm and Richard Thomas, it should have been a guaranteed success, and, in fact, the film was quite well received, even winning awards for two of its stars. But, time has not been good to this adaptation, now that the initial sheen has worn off.

The story is of German teen Paul Baumer (Thomas) who, along with his fellow classmates, is urged on by his idealistic schoolteacher Kantorek (Donald Pleasence) to enlist in the army to fight for the “fatherland” to fight in World War I, and seek adventure, honor, and glory in the name of patriotism. But after enlisting, Paul is first confronted with a sadistic Corporal Himmelstoss (Holm) (who later turns out to be no more than a coward) before he and his school friends are sent off to the front where they are confronted with the harsh realities of war in the trenches; quickly having to become men as they witness the shuttling of young soldiers, younger and younger, being shipped in to replenish the dead. Ernest Borgnine plays a grizzled army private, Stanislaus Katczinsky, meant to act as a tutor to the young men coming in on the metaphorical conveyor belt being led to the slaughter, as it were.

While the veteran actors do their best with the material, ultimately this TV movie gets away from Delbert Mann, who is either overwhelmed by Remarque’s material or too constrained by the broadcast format to do it justice. One of the biggest flaws is the device of a voice over, which here seems more obtrusive than helpful in advancing the story. Secondly, Thomas lacks any sort of charisma in the lead as Baumer, and is in fact outdone by the various veteran actors at every turn. One area where this version of All Quiet does excel is the incredible cinematography of John Coquillon. There are plenty of times where the enormity of the war sequences belie the the fact that this is only a made-for-TV production.

Although this rendition of this classic anti-war novel earned Ernest Borgnine and Patricia Neal Golden Globe and Emmy awards, it does not hold up well to the classic 1930 film by Lewis Milestone (one I still remember watching in my high school “Classics into Film” class, thanks Mrs. Petrocino).

All Quiet on the Western Front comes to Blu-ray from Shout! Factory’s Timeless Media Group imprint with an AVC/MPEG-4 1080p encodement framed at 1.78:1. The image is just middling at best for a 1979 catalogue release, showing lots of softness and plenty of places where specs of dirt and some scratches in the source can be seen. Grain looks natural and isn’t overabundant, but detail is somewhat mushy in midrange shots. Colors are a little pallid, but flesh tones look well enough.

The original monaural soundtrack is offered in DTS-HD Master Audio 2.0 (48kHz/24-bit). While it is a bit boxy and the sound effects like explosions have some audible crackle, it is serviceable nevertheless, providing clear dialogue and minimal hiss.

This All Quiet on the Western Front has not held up well over the years and does not compare to the 1930 cinematic classic. It’s always a difficult thing to adapt such a classic novel film, an even more difficult task to it for television. Delbert Mann, one of preeminent TV movie directors did his best here, but stumbled nonetheless. The strong cast and visuals are the only reasons to watch what is a mediocre effort.

All Quiet On the Western Front is out on Blu-ray July 14, 2015 from Shout! Factory