Animal Kingdom is a crime drama TV series based on the 2010 Australian film by David Michôd. This 10-episode first season, which ran on the TNT cable network and has already been renewed for a second season, follows the story of 17-year-old Joshua “J” Cody (Finn Cole) who must go live with his grandmother, Janine “Smurf” Cody (Ellen Barkin) after his mother dies from an overdose.

Smurf is the matriarch of a notorious Southern California crime clan who use as their front a real estate business, but really Smurf and her sons pull off violent heists and drug running. J must now navigate this new landscape and decide where his loyalties are, especially when it begins to become clear that the police are honing in on the Codys and their crime dealings. At first J seems like a fish out of water surrounded by his very aggressive uncles Barry “Baz” Brown (Scott Speedman), Smurf’s adopted son and the leader of the Cody robberies, Andrew “Pope” Cody (Shawn Hatosy) the mentally disturbed, eldest Cody son recently released from prison whom Smurf has secretly stated medicating, Craig Cody (Ben Robson), and Deran Cody (Jake Weary), the youngest, secretly gay Cody son. The longer he lives with them, however, the more J starts to conform to the Cody code of ethics, that is to say, there are no ethics other than family first, no matter who gets hurt or what gets in their way.

I never saw the original film that this series was based on, it was one of those that managed somehow to fly under my radar, but with its cast and the fact it got picked for a series adaptation, I imagine it was good. This series starts slow, but builds up into a complex crime drama with lots of intrigue and twists. It’s a character study of an actual crime family, and the driving force is not really the teenage J, but the tyrannical Smurf who rules over her boys using both fear and a tight grip on the funds they collect from the jobs they pull. For Barkin, this could be the comeback role of the latter part of her career. She’s been knocking about from one so-so TV series and film role to the next in things like Happyish and The New Normal. Smurf is a career role that will hopefully give her some quality roles that she is more than capable of chewing up. 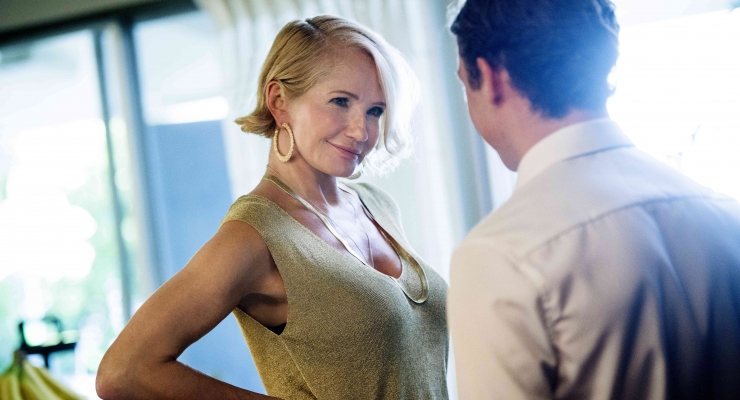 Animal Kingdom gets a solid AVC 1080p encodement framed at 1.78:1. The digital source has good detail and little digital anomalies such as banding. The image naturally conveys the look of sunny Southern California, and there are natural flesh tones and nuanced shadows with little noise.

We get a basic made-for-TV English DTS-HD Master Audio 5.1 soundtrack that is the sole audio option supplied. It isn’t neither completely dry and boring nor overly aggressive. There’s a good bit of atmospherics during the action sequences, but much of the series is dialogue-driven and front-heavy. Some of the music does get a good boost from the LFE.

We get mostly promotional-quality behind the scenes and making of featurettes that are bolstered by multiple deleted scenes for most of the episodes.

I look forward to a second season of this simmering TNT series. This is the sort of edgy crime drama that maybe could have benefited from a spot on a premium cable network, but the creators have pushed it to the limits with fine writing and excellent performances, particularly from veteran Ellen Barkin as the cold-blooded matriarch.