For season 3 of the epic horror/fantasy/sci-fi anime series Attack on Titan, the direction shifts onto the shoulders of Koizuka Masashi, and Chief Director is Araki Tetsurō, who directed for seasons 1-2. The tone remains bleak, dark, and tense, but perhaps there is a bit of a slower pace here, at least in Part 1 (full disclosure, I have yet to see Part 2 of this season). The story spends less time focused on battles defending the wall and taking on the titans/giants, and instead focuses on some political machinations that will come to have major consequences on the humans behind the walls and on the scouts we have been following from the beginning.

Eren and his colleagues are now in the newly formed Levi Squad who are assigned to protect Eren, whose abilities are beginning to fail him. Meanwhile, there is a plot underway by the military police to undermine the scouts and to harm Eren and Historia, whose royal pedigree has put her in danger.

There are a lot of maneuvers and plot twists in these 12 episodes of part 1 of Season 3, and one cannot really divulge too much without spoiling the story arc. Needless to say, there are some answers provided, but not everything is resolved, obviously, since this is only the first half of the season and what appears to be the penultimate season of what has thus far been a nearly flawless series that has maintained a consistency in its drama, quality of animation, and progression of its characters.

This series has always been both grotesque and beautiful in the best tradition of horror and season 3 is no exception. While in part 1, there are a few less opportunities for the giants to appear, when they do we get some chilling depictions of the creepiest of creatures in the classic Titans style and even a moment where we get to see how the humans look from the perspective of the giants, as little dots of light spread across the horizon.

The episodes wrap up leaving viewers wanting more in part 2 and, thankfully, things did pick up a bit after what felt like an excruciatingly slow pace for the first few episodes. The story’s drama, multiple layers, ad twists begin to pull you into its intrigue making it easier to warm up to the lessened action in this season. 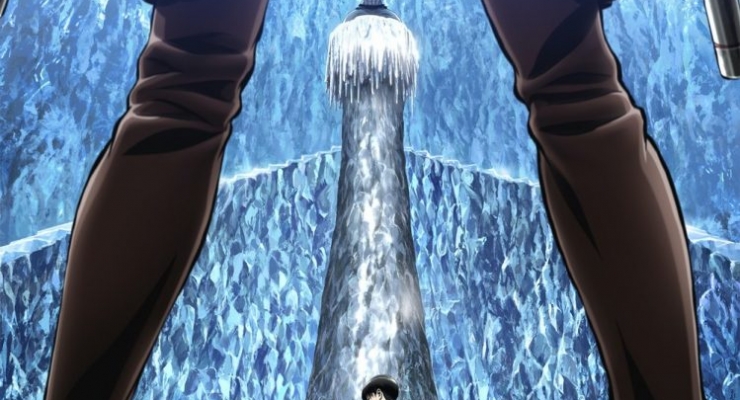 Attack on Titan comes to Blu-ray in a 1.78:1 1080p encodement and it looks crisp, clean, and without any flaws like motion artifacts or stairstepping. The saturation is good without any excessiveness where it shouldn’t be, and ‘pops’ where it should, such as in flames or night skies.

This seems to be not only one of the better sounding releases from Funimation in both its original Japanese-language Dolby TrueHD 2.0 stereo mix, but also the English Dolby TrueHD 5.1 dubbed version. Both have good dynamic range, punchy midrange, clear and full dialogue and wide stereo imaging. The 5.1 mix has a good amount of atmospherics and some discrete sounds that are panned into the surround channels during the action sequences, as well as a solid low end. Additionally, the English voice actors do a better job than usual for most dubs, although I still take exception to some of the overuse of profanity that appears in the English translation for the dub that just isn’t there in the Japanese/subbed version.

This limited-edition collection is packed with bonus features and packaged in a rigid, glossy chipboard slipcover box with space for Part 2.

As always, Attack on Titan delivers with a brilliant round of dark drama, a little bit of action, and eye-catching animation. Part 1 of Season 3 sets the groundwork for what should be an excellent second half to what was already an eventful season. The Blu-ray looks and sounds awesome and the Limited Edition set is packed with bonus materials, and packaged in a collectible, rigid chipboard cover with space for part 2 when it’s released.